Research: Stopping Th17 cells getting in the brain

TH17 cells enter tissues to facilitate pathogenic autoimmune responses, including multiple sclerosis (MS). However, the adhesion molecules involved in the unique migratory capacity of TH17 cells, into both inflamed and uninflamed tissues remain unclear. Herein, we characterize MCAM (CD146) as an adhesion molecule that defines human TH17 cells in the circulation; following in vitro restimulation of human memory T cells, nearly all of the capacity to secrete IL-17 is contained within the population of cells expressing MCAM. Furthermore, we identify the MCAM ligand as laminin 411, an isoform of laminin expressed within the vascular endothelial basement membranes under inflammatory as well as homeotstatic conditions. Purified MCAM-Fc binds to laminin 411 with an affinity of 27 nM, and recognizes vascular basement membranes in mouse and human tissue. MCAM-Fc binding was undetectable in tissue from mice with targeted deletion of laminin 411, indicating that laminin 411 is a major tissue ligand for MCAM. An anti-MCAM monoclonal antibody, selected for inhibition of laminin binding, as well as soluble MCAM-Fc, inhibited T cell adhesion to laminin 411 in vitro. When administered in vivo, the antibody reduced TH17 cell infiltration into the CNS and ameliorated disease in an animal model of MS. Our data suggest that MCAM and laminin 411 interact to facilitate TH17 cell entry into tissues and promote inflammation.

As you know Th17 T cells are thought to be the cell type that drives autoimmunity and so inhibiting their function would be beneficial for MS.  This work suggests that TH17 cells use melanoma cell adhesion molecule (MCAM). This adhesion molecules are found on T cells but also on some blood vessels, but not in the brain.

Laminins are proteins in the membranes around cells such as blood vessels. Laminin-411 (laminin-8) is expressed in endothelial cells, adipocytes, lymphocytes and platelets, and muscle cells as well as pancreatic cells, salivary and gastric glands, and epidermal cells in the developing and adult human bod. One of the main isoform of laminins in capillaries and larger vessels produced by endothelial cells is Laminin-411 and, thus, their role in endothelial basal laminae function is thought to be pivotal. Laminin-411 is secreted by lymphocytes and supports their proliferation. It is also involved in the migration of lymphocytes and neutrophils bone marrow stem cells and tumours. In this study they showed that TH17 cells produce MCAM and then found that this bound to Laminin-411. 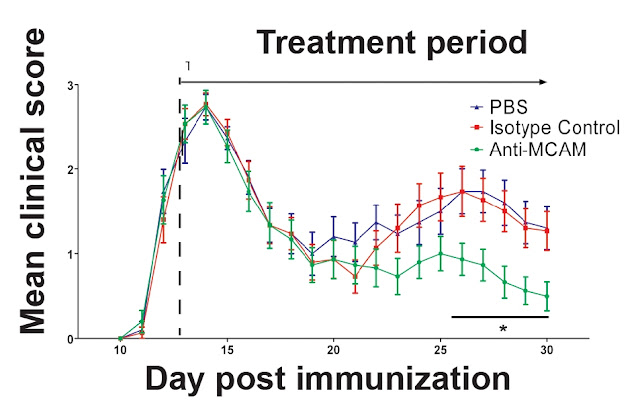 Ted Yednock was the main inventor of the drug that became Tysabri. They did the same type of experiments that lead to that drug but in this case they made a blocker of the MCAM-laminin-411 interaction and gave it to EAE at onset. In contrast to what the abstract said that "the antibody reduced Th17 cell infiltration into the CNS and ameliorated disease in an animal model of MS" it did nothing.

A drug that stops recruitment of cells into the CNS after onset can rapidly stop the accumulation of clinical disease within a day or so.  I suspect the results were so disappointing that they have stopped development of this, because dogma is EAE is caused by Th17 cells and so blocking these cells would block EAE.

However, if you have been following my recent reports both YOU and I know that Th17 cells don't do much in the first phase of EAE. So they got the result (see above) you should get in that it did not work!  It stopped the animals from relapsing, which is what it should do it if it stopped TH17 cells getting in to the CNS.

This may have been the next tysabri and may have less risk of causing PML as it does not affect all of the T cell population. But is it binned forever?

Will they carry on regardless of what they found in EAE, Do they really know about Th17 and forgot to write it in the discussion?

Should we write to them to find out?