MS typically onsets between 20-40 years of age and is more common in women than men. Coming to terms with the disease and its clinical manifestations will therefore often coincide with decisions of child-bearing facing young women.

Relapse risk decreases during pregnancy, however, relapses tend to subsequently increase in the few months immediately after child-birth.

Women with MS currently make a difficult decision between restarting their therapy after childbirth and not breastfeeding, delaying the use of disease therapy in order to breastfeed or alternatively curtailing the duration of breastfeeding in order to restart therapy sooner. 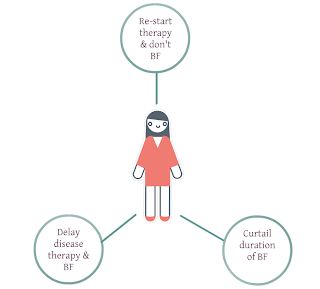 The protective role of breastfeeding on MS relapses may be in part explained by the possibility that MSers who choose to breastfeed may have had less clinically active disease and lower disability at the start of the pregnancy. This has nonetheless been estimated to account for only some of the reduced risk of a post-partum relapse in those who breastfeed, and the majority of the risk of a post-partum relapse remains potentially modifiable through for example breastfeeding.

So, breastfeeding lowers your risk of having a relapse in the 6 months post-partum period by approximately 50% compared to the risk if you did not breastfeed. Given that six months is plenty of time to provide a child with the numerous health benefits of breastfeeding, MSers who want to breastfeed should not feel discouraged from doing so!

Coi: I am an author on the meta-analysis on this topic.