Due to the interest shown in the issue around gray matter and cortical pathology in MS the next series of posts will discuss the issue in more detail.

Methods: In this study specialist MS pathologists analysed global brain involvement in MS focusing on the normal-appearing white matter (NAWM) and the cortex (grey matter). Findings:  (1) New and active focal inflammatory demyelinating lesions in the white matter were mainly present in patients with acute and relapsing MS. (2) More generalised or diffuse injury of the NAWM and cortical demyelination were characteristic hallmarks of PPMS and SPMS. (3) The focal and diffuse white matter injury correlated weakly with cortical or grey matter involvement. Interpretation: The investigators suggest that MS starts as a focal inflammatory disease of the CNS, which gives rise to circumscribed demyelinated plaques in the white matter. With chronicity, diffuse inflammation accumulates throughout the whole brain, and is associated with slowly progressive axonal injury in the NAWM and cortical demyelination. 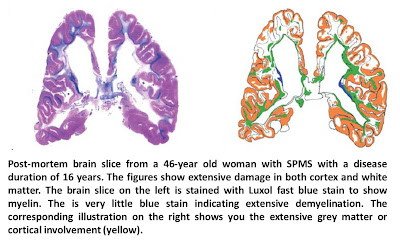 "Not everyone agrees with their interpretation; mainly because MRI studies show early grey matter involvement in MS. This study does however confirm that MS is not only a white matter disease, but involves the grey matter to a greater or large extent. We have to assume that the disease processes in the white and grey matter are similar and will respond to the same therapies."