Article of interest (6) - Effect of pregnancy on relapses

MS is a common in young women.

This study looked at the effect of pregnancy on the course of MS.
The relapse rate in each trimester (3 month period) was compared with the rate during the year before the pregnancy.
The average or mean rate of relapse was 0.7 per year in the year before pregnancy, 0.5 during the first trimester, 0.6 during the second trimester and 0.2 during the third. The rate increased to 1.2 during the first three months after pregnancy and then returned to the pre-pregnancy rate.
The disability score (EDSS) worsened by 0.7 point during 33 months of follow-up, with no apparent acceleration during the period after delivery.
Neither breast-feeding nor epidural analgesia had an adverse effect on the rate of relapse or on the progression of disability in MS. 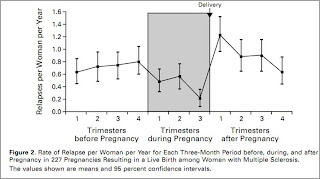 Conclusion: In women with MS, the rate of relapse declines during pregnancy, especially in the third trimester, and increases during the first 3 months after delivery before returning to the pre-pregnancy rate.
Confavreux et al. Rate of pregnancy-related relapse in multiple sclerosis. Pregnancy in Multiple Sclerosis Group. N Engl J Med. 1998 Jul 30;339(5):285-91.
"Woman with MS considering having a baby should find this data encouraging."