Imagine that in health that the nerve impulse (tube train) only has to travel between point A (Bond Street) and Point B (Tottenham Court Road) on the central line for things to work. 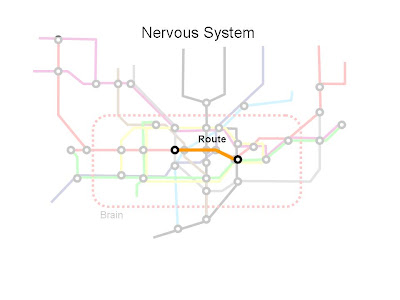 Now because of MS, the central tube line is blocked between Oxford Circus and Tottenham Court Road. Therefore to get from Bond Street, you need to take the Jubilee Line southbound, then change onto the Northern Line to return Tottenham Court Road. This is like the internet (the information superhighway) and the brain, which finds other routes to do the same thing when one information pathway gets blocked. The signal gets to its destination but takes a little longer and uses a bit more of the Tube Networks power. 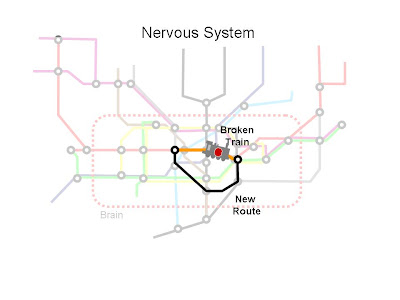 However, to speed up the new route we could add an interchange (synapse) with the circle & district lines. This is called plasticity and occurs when blockade of pathways in the nervous system occurs. 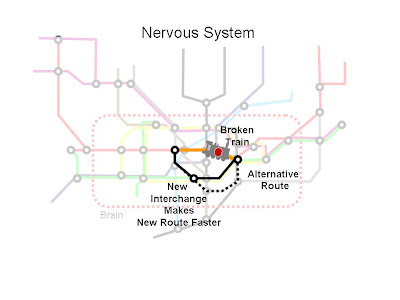 We know this occurs because we can see this occurring using a technique called functional magnetic resonance imaging (fMRI). This works because when areas of the brain work, they use energy that consumes oxygen. Using an oxygen dye that can be seen by the brain scanner, we can see which area of the brain is activated when we are responding to something…..women’s brains and maps, men’s brains and shoes….…Nothing…… but the other way round….. a firework display (You get the drift, despite a sex stereotype for which I apologise). So for any particular task we can see which bit of the brain controls it. After damage to nerve pathway we can see different bits of the brain light up showing us that plasticity has occurred. 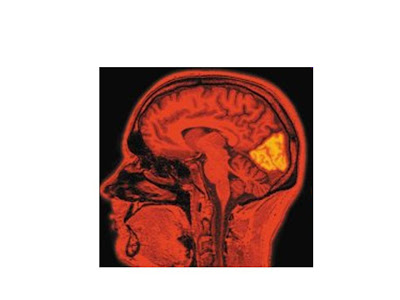 A bit of the visual cortex (back bit of the brain) lights up when visual stimulation is given.

More Next Time. When we can start back at the carpark and get at the problems in progressive MS

To be continued TTFN