We have been slowly building up a picture of how primary progressive MS may develop using transport analogies with cars and underground trains to ask "What is the problem in PPMS?", "Why don't Current MS drugs work in PPMS?"
Now I reshow the first instalment and hope that it is not as complicated as some of you thought when if was first posted (Most thought it was unhelpful)
Relapses are triggered by white blood cells (cars) entering the brain and damaging the oligodendrocyte (0) and nerves (N). This coupled with swelling of the nerve, serves to stop the nerve impulses firing properly. This leads to symptoms. 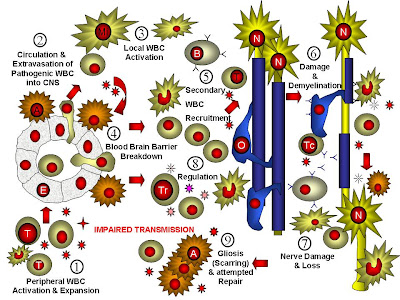 The best treatments of (relapsing) MS aim at preventing white blood cells (WBC) reaching the brain (carpark) and if this happens it will stop the cascade of damaging events (loss of myelin and nerve damage) from occuring. This is the basis for the action of Tysabri, Gilenya, Mixtoxantrone, Alemtuzumab. 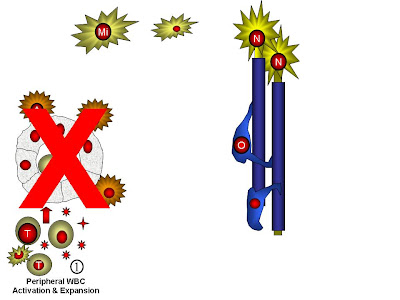 Current effective treatments for relapsing MS work by stopping the white blood cells entering the brain. These (Alemtuzumab, Rituzimab, Cladribine, Bone marrow transplantation, beta interferon) do not appear to stop the non-relapsing aspects of progressive MS.
Therefore we need a new approach to treat progressive MS, because the main problem appears to not be with the white blood cells (although I think that these need to be dealt with also) but appears to be a problem with the nerves, that has been triggered by the damage caused by white blood cells.
Nerves transmit nerve impulses (tube trains) see videos in British or American English to Explain) from one nerve to another across a synapse (interchange. see video). Transmission of the nerve impulse uses energy to transmit the impulse, which results from movement of ions largely sodium (Na) (Black passengers) and potassium. (K) (red passengers) Sodium enters the cell by sodium channels (pores that allow sodium to flow through them) in the nerve. Once the impulse passes the nerve resets itself so that it can transmit the next signal. Within the nerve there is a exchanger (imagine a revolving door). The system pumps calcium (Ca) out of the cell in exchange for sodium. This all helps maintains the health of the cell and te balance of sodium within the cell The myelin sheath made by oligodendrocytes allows the nerve impulse to travel faster. This is because the nerve impulse jumps acrossto the gaps (stations. Nodes of Ranvier) between individual myelin sheaths. (There are lots of videos/tutorials on youtube those by khanacademy.org are informative. (If you watch these- a schwannn celll myelinates peripheral nerves and those in the brain are myelinated by oligodendrocytes but otherwise the message applies to the brain) 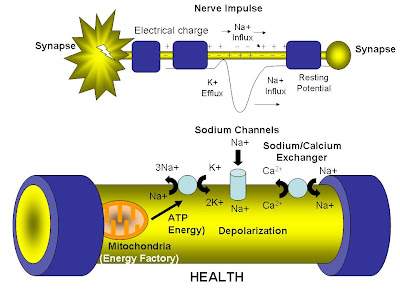 As the compensation mechanisms (plasticity) become exhausted or are not there in the first place (from PP MSers) damage from progressive MS takes over from damage caused during relapsing MS. In progressive MS, loss of myelin (tube tunnel) is a feature of the disease. Initially this damage may be repaired. But as we get older our repair mechanisms become less effective. Furthermore the disease may kill too many of the repairing-cells and the scarring from the damage may stop repair. This makes the nerves vulnerable to further damage.
Once nerves are demyelinated, to keep the nerve impulses moving the nerve must use alot more energy. Low level inflammation which is present in all MS types such as that produced by microglial cells produces mediators such as nitric oxide that stop cells from making enough energy. This blocks the action of the energy-dependent sodium-potassium pump. This results in excess sodium entering the nerve, via the sodium channels. This excess sodium in the cell can cause the sodium-calcium exchanger to go into reverse and it pushes sodium out of the cell whilst pulling calcium into the cell. This can be bad news as too much calcium in cells triggers them to commit suicide. (Train stops working) Therefore simple electrical activity of the nerves can be a problem for demyelinated nerves. As nerve circuits are damaged and lost the brain compensates by using different circuits to perform the task. As nerves are lost it puts more of a strain on the remaining nerves, leading to further nerve loss and the accumulation of progressive disability. 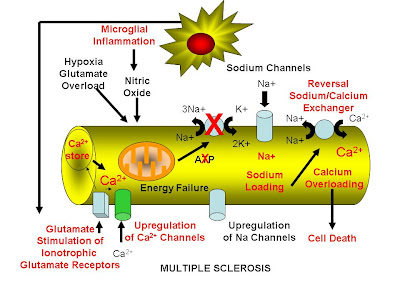 With this scenario progressive disease can occur in the absence of white blood cells and explains why current MS drugs are not useful for progressive MSers.
Importantly it gives us clues (Such as sodium, calcium channel blockers, sodium calcium exchanger blockers, glutamate blockers, etc etc,) on how to treat MS. One obvious route is to repair the myelin, but others such as blocking the accumulation of toxic concentrations of ions in the nerve are even more feasible, because these types of drugs are already availble to treat other diseases such as epilepsy.

Some of these studies have already started and more are planned in the new future.