Basic Science: Forming B cell follicles in the CNS

Ectopic lymphoid follicles (place where antibody producing B cells are generated) are hallmarks of chronic autoimmune inflammatory diseases such as multiple sclerosis (MS), rheumatoid arthritis, Sjögren's syndrome, and myasthenia gravis. However, the effector cells and mechanisms that induce their development are unknown.

Here we showed that in experimental autoimmune encephalomyelitis (EAE), the animal model of MS, Th17 ( a subset of white blood cell that produces interleukin 17 that is thought to drive autoimmunity) cells specifically induced ectopic (In this context not in the lymphoid organs) lymphoid follicles in the central nervous system (CNS). Development of ectopic lymphoid follicles was partly dependent on the cytokine interleukin 17 (IL-17) and on the cell surface molecule Podoplanin , which was expressed on Th17 cells, but not on other effector T cell subsets. Podoplanin was also crucial for the development of secondary lymphoid structures: Podoplanin-deficient mice lacked peripheral lymph nodes and had a defect in forming normal lymphoid follicles and germinal centers in spleen and lymph node remnants. Thus, Th17 cells are uniquely endowed to induce tissue inflammation, characterized by ectopic lymphoid follicles within the target organ. 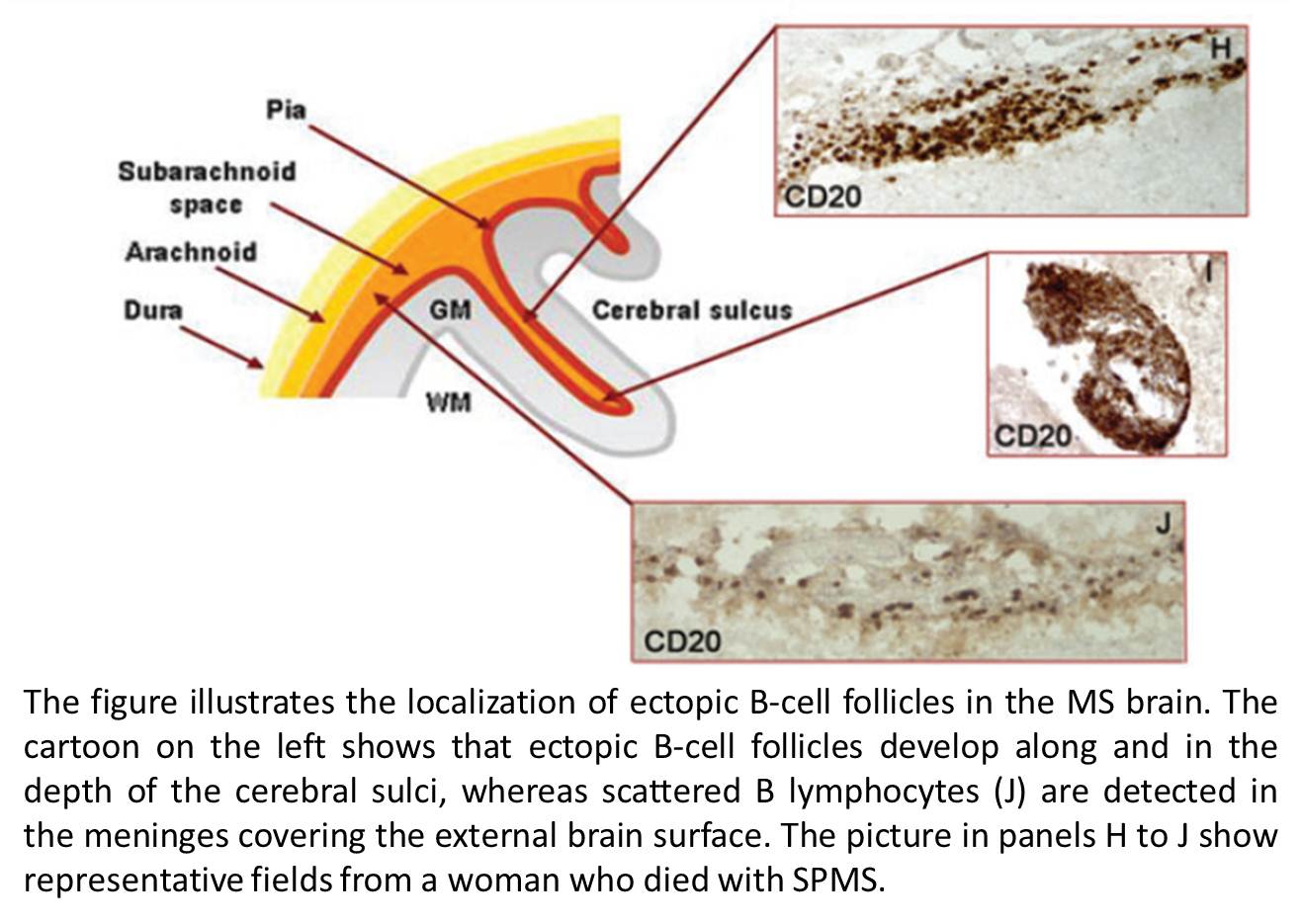 The B cell that make the antibodies are found in structures called "ectopic lymphoid follicle-like structures" in the coverings of the brain and spinal cord; the covering are called the meninges.
Grey matter (4) - Meningeal B-cell follicles in secondary progressive ...
06 Jun 2011
Multiple Sclerosis Research: Gray matter and B cells
07 Oct 2011
Multiple Sclerosis Research: Research: antibody production
30 Aug 2011

To date there is limited evidence that true B cell follicles, as opposed to B cell rich accumulations that are a normal component of EAE, occur in EAE and their role and occurrance in (progressive) MS is contentious. However some people think that they are important in driving progressive MS (so why does rixtuimab not appear to inhibit non-enhancing, progressive MS?), where many B cell rich aggregates accumulate in the sulci (foldings of the brain) of the brain, which mice lack.

Whilst it is known that some immune molecules such a lymphotoxin can influence B cell follicle formation and lymph gland development, this study implicates Th17 and a molecule called Podoplanin in this process. Podoplanin is expressed by lymphoid endothelium and importantly follicle dendritic cells in B cell follicles and so would be in a good location to influence ectopic follicles generation. Looking at the pictures presented in the paper they appear to be more B cell rich aggreates rather than true B cell follicles , but the same could be said for many of the claims in MS. These aggregates appear at the earliest stages of disease rather than something that seems to accumlate with progression. When similar studies were done by the same authours/pathologists two years ago they were only called the infiltrates aggreates and not follicles. However if this process is important to progression then this study is very interesting and this study starts to highlight a new target to inhibit this aspect and the "B cell hypothesis of progressive MS" may become more testable.

Whilst, I suspect this will turn out to be abit of EAEology (Science of EAE rather than MS) let us hope that it opens a new avenue that allows us to investigate B cell follicles....If correct then some people will need a rethink, as there is no Epstein-Barr Virus (doesn't infect mice) in sight.

There is an ongoing trial of inhibitors of Th17 cells that are recruiting in mainly Eastern Europe (NCT01051817) that would target this pathway. I suspect the result will be very interesting.

I am sure we will see and hear more on this aspect in the future as people try to recreate and explore this. Let us hope someone does this quick before Dogma sets in.