Misdiagnosis. Doctors Not in the House mode

Is there a Doctor in the House? or importantly is there a House in the Doctor?

It is no laughing matter to be diagnosed with MS and is bad to be misdiagnosed, so you asked "What do you think about this study that concludes from a survey of MS neuros that it is common for people to be incorrectly diagnosed with MS and that this is wasting large numbers of healthcare dollars?"

First problem was what study, as we could not find the Research Article on the work in the place the media said it was. The media had spun the story from a press release done a day early. Eventually we did find the article, so we could see what the paper was actually saying...

Based on survey of MS specialits in Oregon, USA it was "estimated that the 122 MS specialists had seen almost 600 patients within the past year who had been misdiagnosed with MS....approximately 280 patients who had been misdiagnosed and were receiving MS treatment — costing the health system at least $11 million per year in unnecessary and inappropriate treatment for that group of patients alone".
As in any walks of life there are Good Doctors and there are not so good Doctors. Let's not call them bad. Unfortuanately Neuros are only human (yes they are not gods.......you know that, I know that, but do they?) and humans make mistakes.

Although there are guidelines for diagnostic criteria for MS, the clinical profile that people experience is not a "one size fits all" and there is a lot of variability in the disease presentation of MSers. When you have a diagnosis of exclusion as in MS, which is when you say is it unlikely to be anything else, then of course there are mistakes. Would Dr. House MD. do that? Surely not!.

For those living under a rock or without television Dr.House is the world famous diagnostitician (What do you mean thats not a real word and he's not real!....Well I suppose...who in America has an accent like that... I have never heard one and when you go in for an in-grown toe nail you do get an MRI, lumbar puncture, brain biopsy, heart massage and thousands of dollars in charges for all the tests he does.....but you are always sorted out in the end....I wish life was really like that). 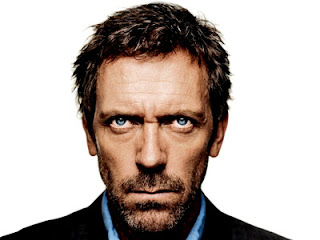 Does MS misdiagnosis happen in the United Kingdom. Well yes it does!

Here is some real-life experience from one of the Neuros from Team G. Of 499 referrals, for suspected "MS?" between 1999-2008, largely from GPs (General Practioner= general medicine) the results are as follows: 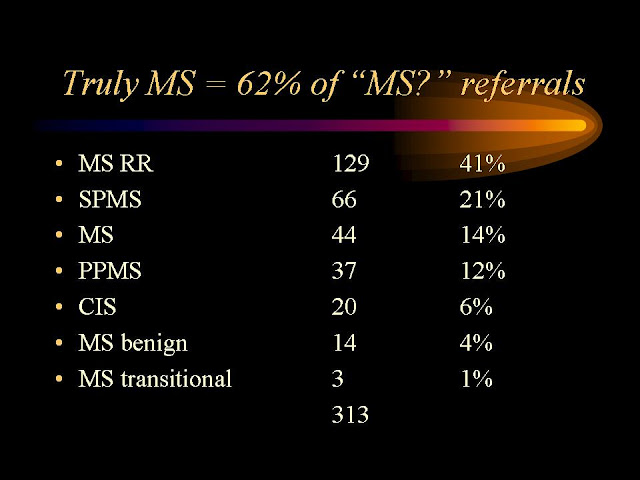 So according to the Neuro the GPS only got it right 62% of the time and got it wrong 38% of the time. Although the Neuro did not know what a lot of the problems were. 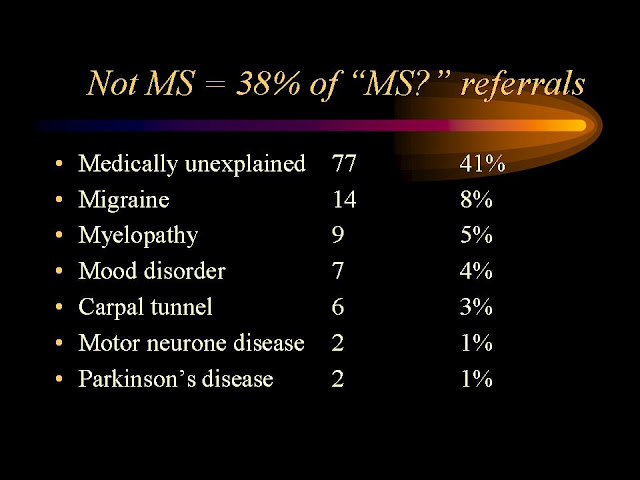 In terms of getting expensive drugs in the UK, the Neuro would be the person prescribing them initially and the system is geared so the specialist makes the call.

But will the Neuro always get it right? Probably not. They may misdiagnose MS in "about 2-5% of cases. This figure has been helped by the advent of MRI", which is a diagnostic aid.The diagnosis of childhood MS is even harder than adult-onset MS.

The importance of correct diagnosis is not only about mis- prescription of expensive drugs, which this is clearly very important when you are paying for them. There are guidelines about how drugs can be prescribed in the UK, which is much more restricitve than occurs in the USA. However, it is also about unnecessarily exposing someone to the risks of side-effects of a drug. As such the distinction between a diagnosis of neuromyelitis opitca and MS has become increasingly important. There is a disconnect between the response to therapies, which may worsen NMO, whilst inhibiting MS or alleviating NMO whilst doing nothing to MS.

If you wonder what Prof G will have to say about this, see below?