#MSBlog: Should we support off-label prescribing?

..... The FDA has an official policy to provide physicians the ability to prescribe approved drugs for unapproved uses called the "practice of medicine exemption." Introduced in 1972, this policy states that a "physician may, as part of the practice of medicine, lawfully... vary the conditions of use from those approved in the package insert without informing or obtaining the approval of the FDA."

..... The FDA repeatedly has pointed out that off-label use is not experimental and may be rational and appropriate. The FDA historically has refrained from attempting to interfere in the physician-patient relationship. In general, the FDA has not objected to physicians using an approved new drug for unapproved use when, in the physician's judgement  the drug may provide benefit to a particular person's condition.

..... Under common law, writing an off-label prescription is not "per se" negligent. The standard of care is usually established by evidence of community medical standards. Commonplace off-label use consistent with community practice generally does not constitute malpractice.

..... The FDA sporadically has attempted to suppress off-label prescriptions. In 1979, the FDA endeavoured to prevent a physician from prescribing a drug, edetate (EDTA), for treatment of arteriosclerosis, an unapproved use. EDTA is FDA approved for lead poisoning. The Fifth Circuit United States Court of Appeals rejected the FDA's claim that the physician had "misbranded the drug." The court pointed out that a physician may, as part of the practice of medicine, lawfully prescribe a different dosage or use for the drug as long as the use is not contraindicated. 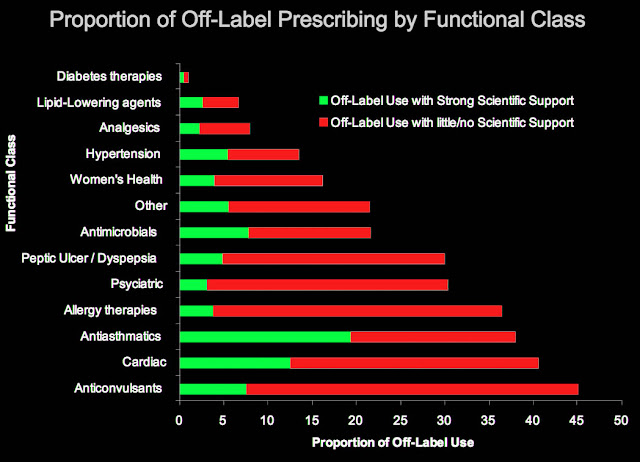 "Similar rules apply in the EU. However, a problem arises when you want to prescribe off-label drugs when there are no licensed drugs. Hence, off-label prescribing is the norm in orphan diseases and paediatrics."

"Orphan disease are rare diseases that typically affect small number of people. Both the EU and US governments have put in place legislation to encourage the development of drugs for orphan diseases. The legislation lowers the bar for entry and provides incentives to Pharma to develop drugs in the first place."

"Off-label prescribing in orphan diseases is a problem when the treatment you want to prescribe is expensive. For example, using rituximab for NMO. In general, NHS Commissioners' say no unless you can make a strong case for individual NMOers. However, if you make too many requests they then turn down further requests and ask you to put a business case together to support its use under the NHS. These business cases usually fail as the evidence is insufficient, for example teh evidence that rituximab is effective in NMO is based on cases series and is simply not good enough. In other words we need data from large randomised double-blind studies and if positive we have to show that the drug is cost-effective. All this takes time and money, and in the interim many NMOers could go blind and/or become paraplegic."
"In short, preventing off-label use in orphan diseases also stifles innovation. Typically some brave clinician, or innovator, decides to try drug X in condition Y; this decision usually has a strong rationale. If drug X works the clinician then treats a few more people with condition Y and creates a case series. These case series of open-label treatment then provide the platform for doing clinical studies; either small proof-of-concept studies or full-blown pharma-funded phase 2 and the 3 studies. This is exactly how alemtuzumab was developed for MS. Professor Compston was brave enough to try in an individual with active MS and the rest is history. In the modern era with tight-fisted Commissioners this type of discovery route will dry-up. Hence the frustration of Maurice Saatchi at the unwillingness of his wife's oncologists to prescribe experimental drugs for his wife and his push for a private members bill. "

'Doctors are too scared of getting sued to make any steps forward in finding a cure for cancer', Lord Saatchi said as he launched a Private Members' Bill to give legal defence for doctors who make medical innovations. He said innovation is being stifled by medical law because no doctor has a defence against negligence claims if they have deviated from standard procedure. The bill aims to clarify the differences between "responsible innovation" and "reckless experimentation", he said.

"What in the situation were there are licensed drugs; for example cladribine. If the NHS condoned the off-label prescribing of cladribine for highly active MS it would cause problems. Both natalizumab and fingolimod are licensed for this indication therefore the prescribing of cladribine would be illegal if this was done systematically  across the NHS. This is despite there being good evidence that cladribine is a very effective drug in MS and it would save the NHS hundreds of millions of pounds per year. We can't prescribe cladribine as we have to prescribe the more expensive licensed therapies. If not, Biogen-Idec and Novartis would have the legal right to challenge the NHS under current EU legislation. This has happened recently with Biogen-Idec legally challenging pharmacies who were formulating 4-aminopyridine for MSers with walking difficulties when Fampridine (slow-release 4 aminopyridine) has an EU license (Fampridine is marketed by Biogen-Idec in Europe). Another example is from the field of ophthalmology; Novartis has recently challenged the NHS for allowing certain NHS Trusts to allow their consultants to use bevacizumab (Avastin) for treating macular degeneration when they should have been using the vastly more expensive ranibizumab (Lucentis), which is  the licensed product. Bevacizumab and ranbizumab are very similar to each and other and are equipotent in macular dgeneration. These examples illustrate an important legal precedent; we have to protect Pharma's market from unlawful competition from unlicensed drugs. Why? We have to maintain the status quo so that Pharma can make a profit. Pharma profits are then used to pay taxes, dividends to investors - most pension funds hold large blocks of pharma shares - and most importantly to allow Pharma to continue investing in R&D. The latter is the only way we as a society will continue to innovate and find new treatments for diseases, for example progressive MS, Alzheimer's disease, Parkinson's disease, cancer, etc. This is why it is illegal to systematically prescribe off-label products."

"Another driver is your peer-group; if you are seen to be a consistent outlier when compared to your colleagues you are courting trouble. If anything adversely happen to the MSers you were treating and they took out a malpractice charge against you may have difficulties defending yourself when none of your colleagues were behaving in a similar way to you. It may be okay to be an innovator, but not too much of a maverick. It is all about getting the balance right!"

"Please let us know how you feel about this issue by completing the poll below. Thanks."