"We need your help. If you have been reading this blog and following the numerous posts on progressive MS, and brain atrophy in MS, you will know that the progressive phase of MS is present from the beginning of the disease. How do we know this? Studies of MSers presenting with their first clinical attack already have significant brain atrophy on MRI and about 30-40% have subtle cognitive impairment. When you look even earlier in people diagnosed with asymptomatic MS, or RIS (radiologically isolated syndrome), you find brain atrophy is present in about 25% of these subjects. In other words the progressive phase of the disease can be present before the disease manifests. The only reason MSers don't have progressive physical disability from the outset is that  their brains and spinal cords adapt to damage by using up their reserve capacity. It is  only once this reserve capacity is exhausted that progressive MS manifests itself as secondary progressive MS. We think MSers with PPMS have the same problem, the only difference is they were unlucky not to have relapses. Relapses at least allow us to get in with DMTs early to slow, or prevent, further damage. Therefore it makes little sense to wait until progressive disease starts to target progressive MS. We need to start neuroprotective drugs as soon as possible in the course of the disease."

"Our group at MS@UCLP are active in trying to test several putative neuroprotective agents in MS. In addition to two commercial trials testing natalizumab and siponimod in SPMS we have three investigator-led, or non-commercial, studies that are running. Firstly, the phenytoin trial in optic neuritis. This is testing the ability of phenytoin to prevent or reduced the loss of nerve fibres in the retina in acute optic neuritis. The PROXIMUS Study that is  testing adding-on oxcarbazepine to existing DMTs in MSers with early SPMS and the SMART Study that is comparing three agents (ibudilast, amiloride and riluzole) to placebo in SPMSers not on a DMT. We now want to do a fourth trial looking at a putative neuroprotective agent, that has a dual mode of action, as an add-on to 1st-line DMTs in early RRMS. We want to target RRMS as this is were MSers have the most to gain. Our primary outcome will be a reduction in brain atrophy. The question I would like to ask you is would you be willing to take and additional drug on top of your current DMT to see if we can slow the progressive phase of the disease? We know that 1st-line licensed DMTs are not effective at slowing done brain atrophy."

"The following diagram illustrates what we are trying to do with our neuroprotective programme in relapse-onset MS. I think the picture is self-explanatory. I strongly believe in a combination therapy strategy, i.e. an anti-inflammatory drug in combination with a neuroprotective therapy and early treatment. The earlier you prevent neuronal and axonal loss the more you have to save and the greater impact you will  have on an individual with MS." 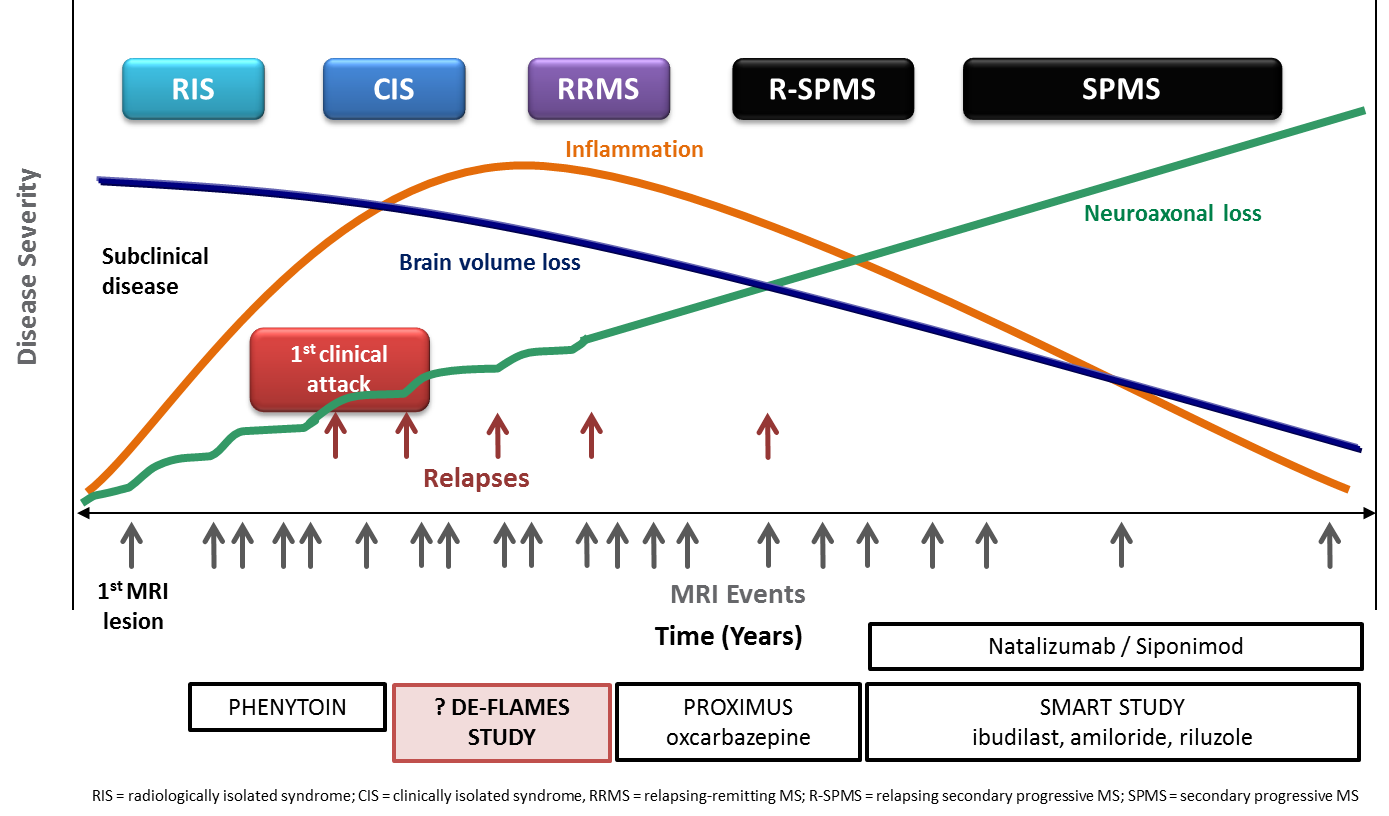 "I would like to point out that all these four neuroprotective investigator-led studies we have, or will be, embarking on come from research done as part of our PROMISE 2010 programme grant. A lot of commentators have said  that nothing came of PROMISE 2010 and I say this is not true. The problem is that it takes 10-15 years to do science and a lot of interesting new ideas and trial designs have emerged from the investment in that programme. I would therefore like to take this opportunity to thank the National MS Society of the US (NMSS) and MS Society of Great Britain and Northern Ireland for there generous and ongoing support; it is much appreciated and hopefully it will lead to a licensed treatment for progressive MS."