Therapeutic lag: is it time for a new paradigm in progressive trials?

Can we do progressive MS trials more intelligently? #MSBlog #MSResearch

"The study below shows that interferon-beta treatment may work in PPMS provided the follow-up is long enough; in this case 5 years. PPMSers who had only been treated with IFNbeta for 2-years clearly do better at 5-years than PPMSers treated on placebo over the same period of time. There was a lag in the onset of action of interferon-beta."

"Why a lag? One interpretation is  that the impact of anti-inflammatory medications in progressive MS may take several years to play out. In other words progression over the next 2 years was primed by inflammation two years ago. Suppressing inflammation today will have not impact over the next 2-years as the damage priming progression over the next 2 years has already occurred. In other words all anti-inflammatory therapies will have a lag in terms of showing a treatment response in progressive MS."

"What do you think of this concept? Does it make sense?"

"I drew this picture last year to illustrate the concept of the therapeutic lag. I hope you can understand it. What has made me refocus on this are my own clinical observations from using highly-effective therapies. I am beginning to see this therapeutic lag in clinical practice. In MSers who have advanced highly-active MS who go onto natalizumab continue to progress for about 18-24 months before they flat-line and stabilise with a fixed level of disability. This observation is different from MSers with early MS who still have reserve capacity; in contrast they tend to improve." 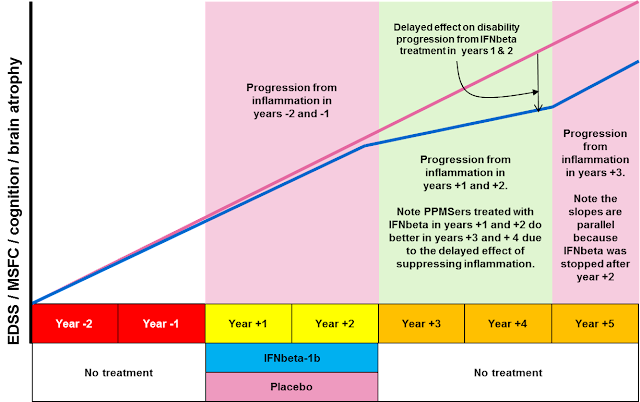 "If I am correct about the 'therapeutic lag' then the MS community has to start taking this into account when designing future progressive MS trials. Is this feasible? Are 5-year studies doable? They will be very expensive to do. Will Pharma have the balls, and resources, to go after progressive MS with a 5-year study?"

"One way of doing this is to de-risk the trials and allow multiple trials to be done in parallel using an adaptive design. In other words we need to get several pharma companies to run their drugs head-2-head in same study. The would share the cost of the study, which would make it cheaper to do. Adaptive shared trials of this nature are not new and happen in other fields, in particular oncology.I-SPY 2 is a phase 2 breast cancer trial that was launched in 2010 by 5 Pharma companies, which uses an adaptive design to randomised patients to one of 7 experimental therapies. This has now been followed by an I-SPY 2 a phase 3 adaptive trial. Similarly the IMI (Innovative Medicines Initiative) has called for proposals for a similarly designed trial in Alzheimer's disease; at least 12 drug companies have expressed an interest in being involved. May be we can do the same  thing as part of the Progressive MS Alliance (PMSA)?  Will the PMSA adopt and champion this idea in the MS space?" 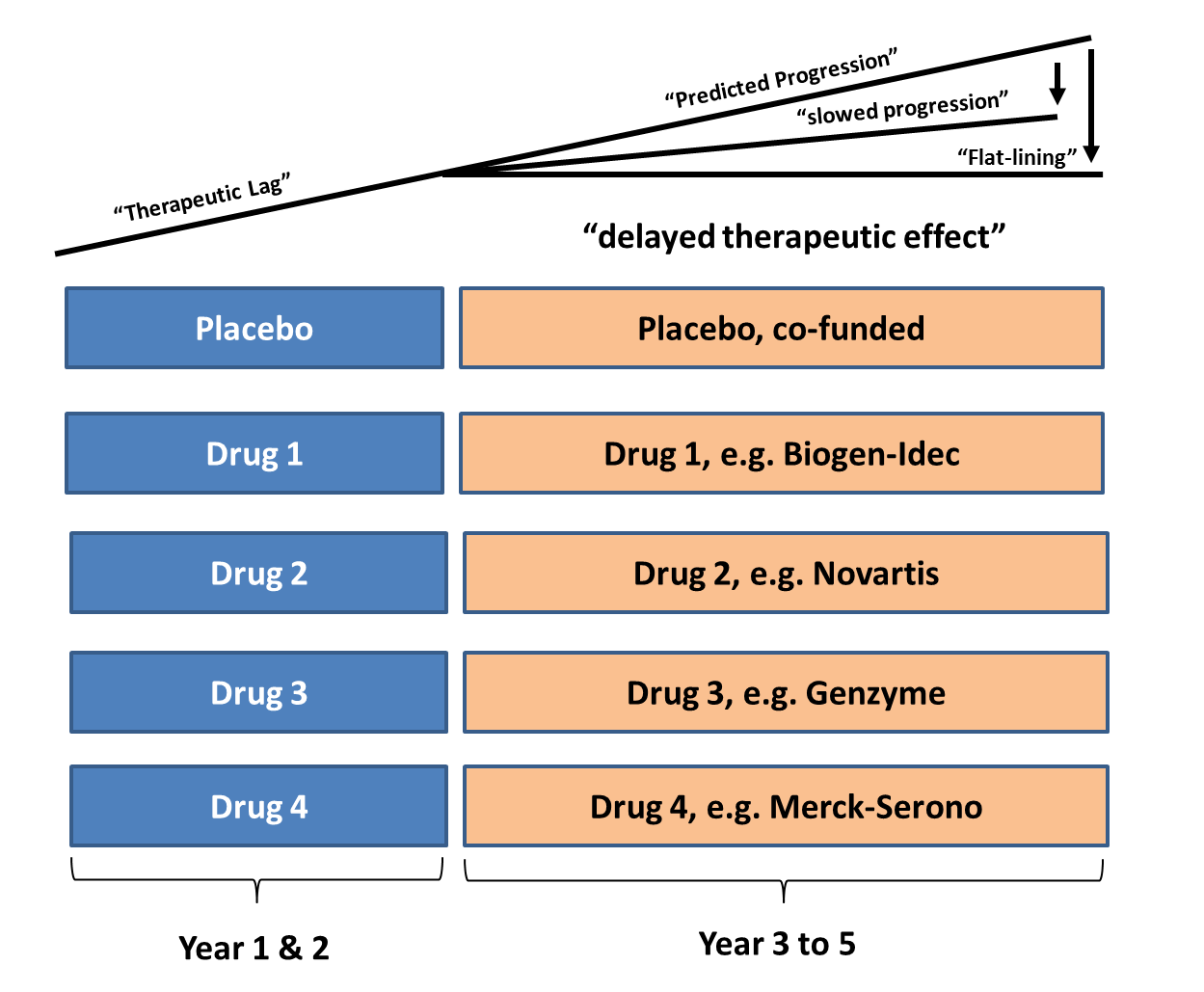 "If we don't learn and adopt best practice from other specialties we will be doing MSers a disservice."

OBJECTIVES: To investigate, during the 5-year period without treatment after termination of a 2-year clinical trial of interferon beta-1b for the treatment of PPMS.

RESULTS: After 5 years without treatment, the interferon beta-1b group had better 9-Hole Peg Test (p=0.02) and Word List Generation Test (p<0.001) scores, and MRI measures in the normal-appearing white matter were significantly better. During the entire study period (from trial baseline to assessment at 5 years without treatment), the placebo group showed a greater decrease in brain volume (p=0.004). The in-trial increase of lesions correlated with the worsening of the EDSS score during the 5-year period without treatment (p =0.004).