Why the results of laquinimod are so important?

It is time we started doing combination therapy studies. We owe it all the MSers to translate what we have learnt from basic science. #MSBlog #MSResearch

"As you are aware I am very impressed by the laquinimod phase 3 results. Why? Laquinimod is a drug that does not have much effect on inflammatory MS disease activity, i.e. relapses and MRI activity (Gd-enhancing and new T2 lesions). Despite its weak anti-inflammatory effects laquinimod has an impact on disability progression, that appears to be independent of relapses and it slows the rate of brain atrophy. All this points to laquinimod having neuroprotective effects downstream of inflammation. It now appears that laquinimod may be working on glial cell activity and the innate immune system; laquinimod down-regulates the mechanisms responsible for the slow-burn we see in MSers. Are the laquinimod results reliable? Almost certainly they are; why? Mainly because there has been two large phase 3 studies showing the same effect. This makes  the chances of this being a chance result highly unlikely."

"Are there other drugs that dissociate effects on neurodegeneration and inflammation? Yes, there are. Ibudilast is another drug that prevents brain atrophy but has little impact on inflammatory MS activity. We are so impressed with the effects of ibudilast that we have included it as one of the active treatment arms in our proposed SMART study. The SMART study will be looking at the impact of several agents in SPMS. In addition, a large multicentre study ibudilast funded by the NIH is about to start in the US. I am less confident about the results of ibudilast, when compared to laquinimod, as there are only results from a single phase 2 study to support the drug and there is the potential for ibudilast to make the inflammatory component of MS worse. The ibudilast results could also be a spurious or a false-positive result. Ibudilast is an enzyme inhibitor and is also likely to work downstream of 'autoimmune inflammation'."

"It is clear based on my treatment philosophy that both laquinimod and ibudilast need to be tested in combination with an anti-inflammatory therapy. We need to  target both upstream inflammatory events and downstream neurodegenerative events. Only by doing this will be applying what we have learnt from basic science to clinical trial design for progressive MS. In addition, there is a need for combination therapies to be done in early and late MS. Early because there is more brain to save; simply focusing on progressive disease is foolish. By the time MSers enter the progressive phase of  the disease they may have lost too much brain and hence the chances of modifying the course of the disease becomes harder if not impossible. We know from brain atrophy studies that the progressive phase of the disease is there from the outset; the reason why we don't see it in early disease because the brain is remarkably good at adapting to damage due to its reserve capacity. Once the reserve capacity is exhausted progressive MS ensues relentlessly."

"Finally, daclizumab (anti-CD25) is another agent that seems to have a greater effect on disability progression relative to its impact on inflammation. This drug is very exciting as it also boosts a component of the so called innate immune system, namely the NK cell. This cell fights infections, in particular viral infections. The latter is why I am so excited about this drug. We now need to wait to see the results of the phase 3 RRMS trial of daclizumab to see if its impact on disability progression is so impressive. If the early results are reproduced there will be a very strong case for taking daclizumab into SPMS and PPMS. The challenge is will two separate studies be necessary or can we convince the regulators that non-relapsing SPMS and PPMS are the same disease. In my opinion, everything points to SPMS and PPMS being the same disease hence my support for combing them in one progressive trial." 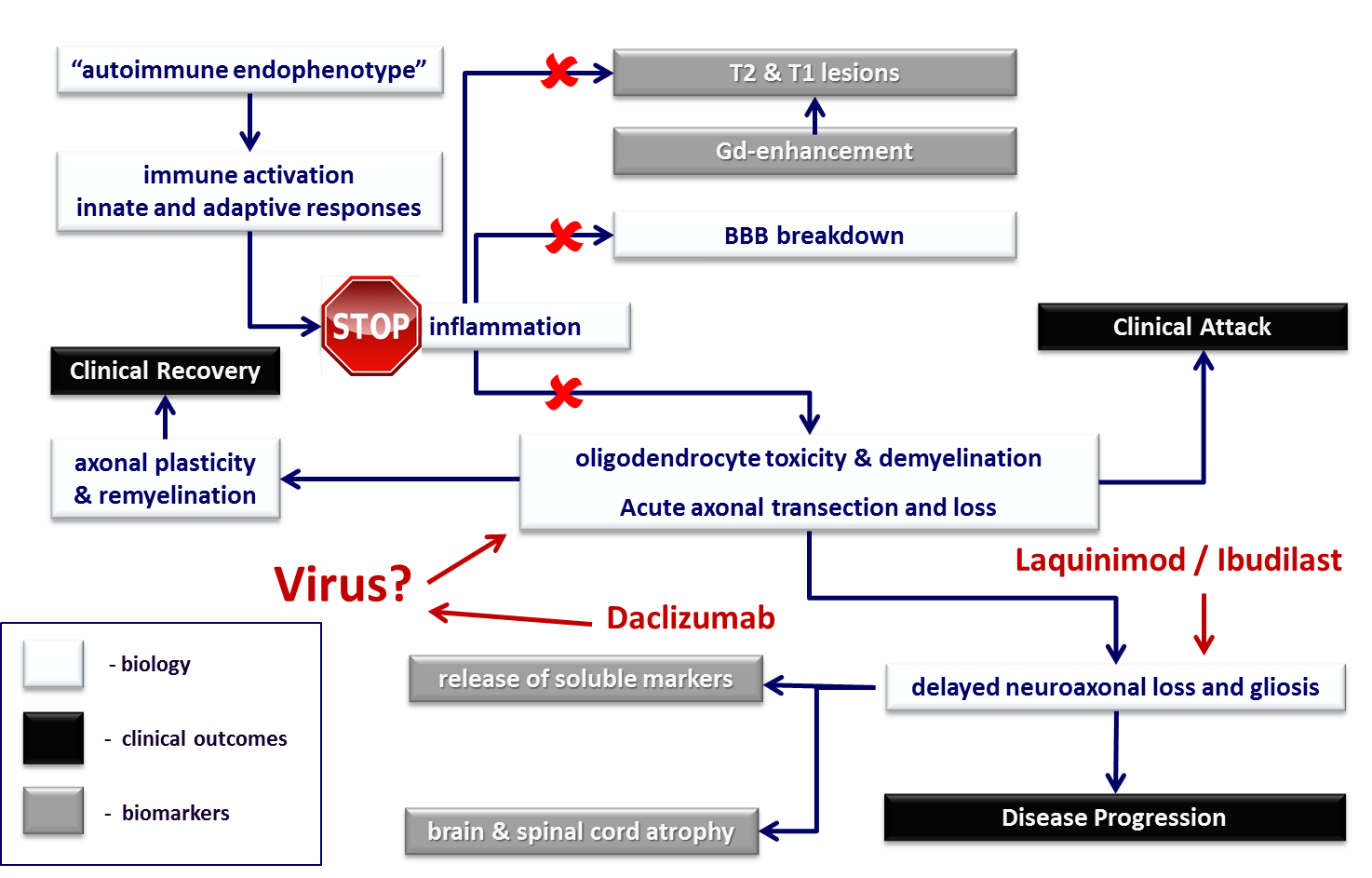