Alemtuzumab: long-term follow-up for up to 12 years

Long-term follow-up of alemtuzumab-treated MSers. Is it as good as it says on the vial? #MSBlog #MSResearch

"The abstract below summarises the long-term follow-up of the alemtuzumab-treated MSers in Cambridge. Please note these MSers had highly-active disease and were treated as part of an open-label compassionate use programme. On average this group of MSers would be expected to do poorly and would almost certainly end-up on natalizumab treatment in the current NHS environment. It is remarkable that just over half of the treated MSers were rendered NEDA after two courses. Please note that some of this cohort have reached 12 years of follow-up; this is too early to say whether or not they been cured of their disease. 48% of MSers needed more than two courses. Only one MSer required 5 cycles of treatment; this suggests that almost all MSers treated with alemtuzumab respond to this treatment given sufficient cycles of alemtuzumab. We will need to wait to see if the open-label extension study of the phase 2 & 3 programme confirms these results."

"Overall 60% of MSers had a stabilization or improvement in their disability. It will be important to find out what happens to markers of disease activity that reflect deeper layers of the iceberg; those beneath the water. Has the rate of brain atrophy in this group been normalised? Do they have normal spinal fluid neurofilament levels? Are the cognitively stable? What has happened to their quality of life? I would be very interested to know in those that have been followed up for 10 years or more and have NEDA if they have lost their oligoclonal IgG bands in their CSF." 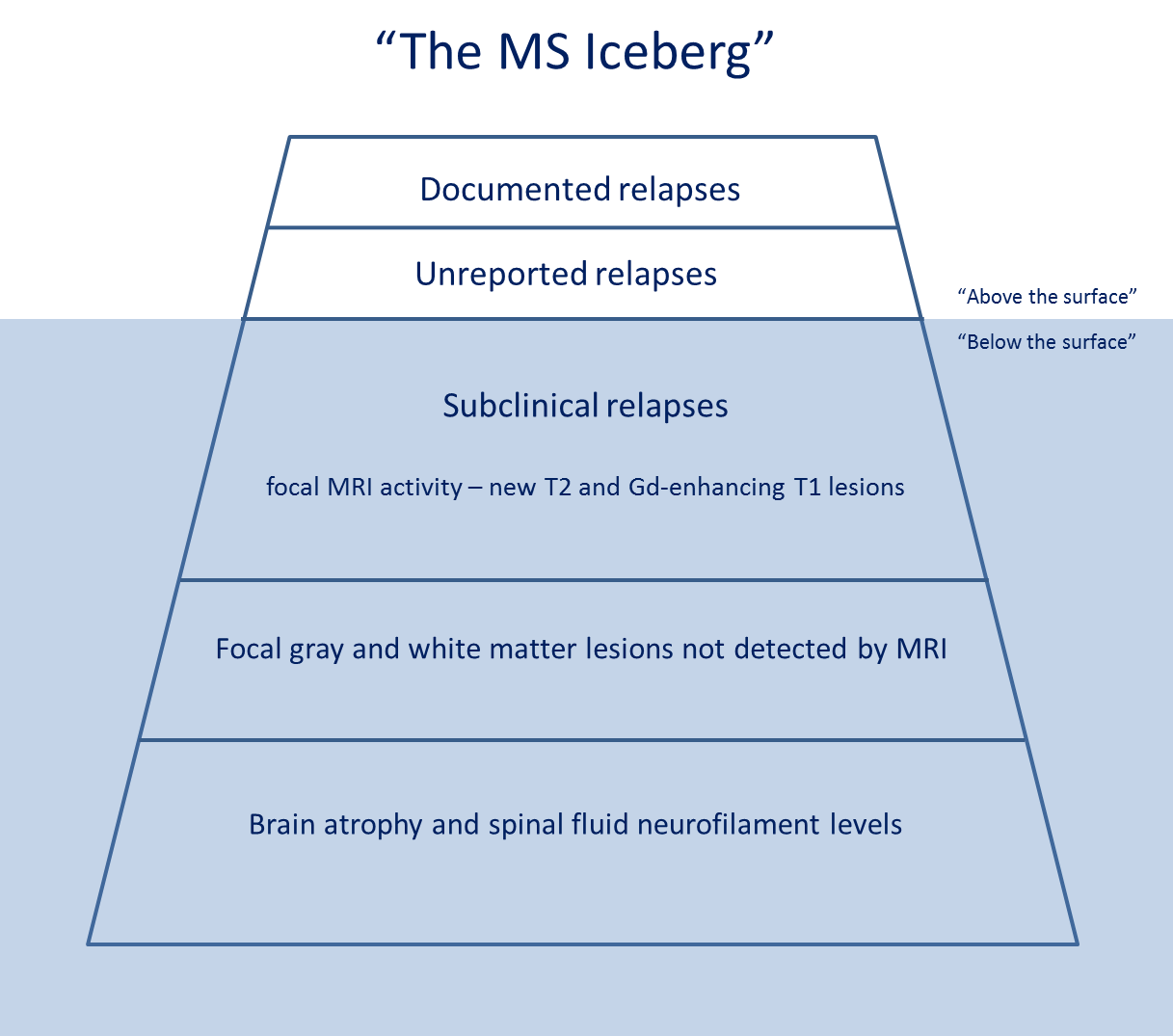 "Please note that almost 50% of treated MSers developed secondary autoimmunity as a consequence of alemtuzumab treatment; a stark reminder that a decision to be treated with alemtuzumab needs to be taken seriously and that you need to highly motivated and adherent with the strict monitoring programme to detect these complications."

OBJECTIVES: Alemtuzumab is a newly licensed treatment of active relapsing-remitting multiple sclerosis (RRMS) in Europe, which in phase II and III studies demonstrated superior efficacy over β-interferon in reducing disability progression over 2-3 years. In this observational cohort study, we sought to describe our longer-term experience of the efficacy and safety of alemtuzumab in active RRMS.


METHODS: Clinical and laboratory data including serial Expanded Disability Status Scale (EDSS) assessments, from all 87 MSers treated with alemtuzumab on investigator-led studies in Cambridge, UK, from 1999 to 2012, were collected. The occurrence of adverse events including secondary autoimmunity, malignancy and death, and pregnancy outcomes was recorded. Baseline variables including age, disease duration and relapse rate were compared in univariate and logistic regression analyses between groups with different disability outcomes.

RESULTS: Over a median 7-year follow-up (range 33-144 months), most MSers (52%) required just two cycles of alemtuzumab. In the remaining MSers, relapses triggered re-treatment to a total of three cycles (36%), four cycles (8%) or five cycles (1%). Using a 6-month sustained accumulation of disability definition, 59/87 (67.8%) of MSers had an improved or unchanged disability compared with baseline. By an area under the curve analysis, 52/87 (59.8%) MSers had an overall improvement or stabilisation of disability. Higher baseline relapse rate was associated with worse long-term disability outcomes, with trends for longer disease duration and older age at first treatment. Secondary autoimmunity was the most frequent adverse event occurring in 41/86 (47.7%) MSers, most commonly involving the thyroid gland.

CONCLUSIONS: Alemtuzumab is associated with disease stabilisation in the majority of MSers with highly active RRMS over an average seven-year follow-up. No new safety concerns arose over this extended follow-up.