"I have been heavily criticised by MSers and my colleagues for trying to redefine MS as a dementia and for focusing on brain atrophy and cognitive impairment. I am told why be negative and not everyone with MS has cognitive problems. The study below focuses on the entity of cognitive-MS, i.e. the small group of patients who present with cognitive impairment. I have several patients like this in my clinic and when you scan them they typically have large lesion loads and gross brain atrophy. I have always assumed that they have had MS for a long time before presenting. But this is not necessarily the case; for example I look after one patient who had a catastrophic disease early in the course of the disease and now has severe cognitive impairment. The latter is despite alemtuzumab treatment having switched off  the inflammatory component of the disease (relapses and focal MRI activity)."

"What is important to realise that MS causes cognitive impairment and is largely driven by gray matter disease that is not visible on our routine MRI scanners. This is why I am a proponent of early effective treatment to slow down or stop inflammatory disease activity. The latter may not be sufficient to prevent ongoing damage, which is why we are working on neuroprotective strategies."

"Please remember that MS is a preventable dementia. Prevention needs to be stressed. If we treat MS early and aggressively I am confident we will prevent dementia. This is why we need to adopt treat-2-target of NEDA with the aim of preventing end-organ damage. Anything less is unacceptable. MSologsists now have a responsibility for protecting the brains of their patients so that they maintain their cognitive reserves for later on in life when they have to face the ravages of ageing."

"In response to some of the questions on this post you may find the following presentation I gave at ECTRIMS 2013 helpful."" 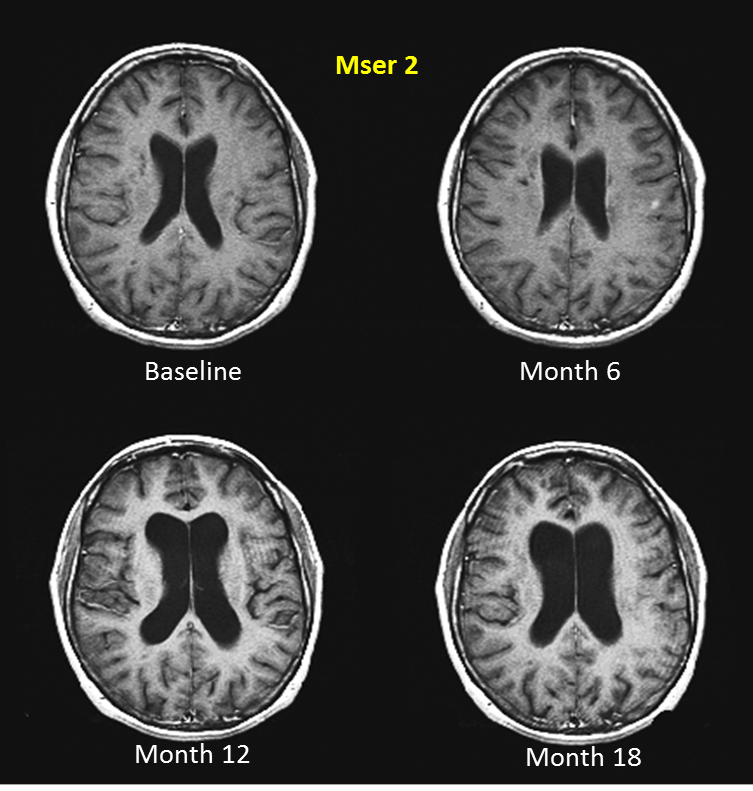 BACKGROUND AND OBJECTIVE: Cognitive and behavioural symptoms are common in MS, but they are rarely the inaugural and predominant manifestation of the disease. Our objective is to characterize the clinical and radiological features of cognitive-multiple sclerosis(cog-MS), defined as MS subjects who entered into the disease with cognitive symptoms, which subsequently remain the predominant manifestation.

METHODS: We describe the disease course, and clinical and radiological features of 18 subjects with a cognitive form of MS.

RESULTS: Memory loss and behavioural changes were the primary symptoms at disease onset. They remained prominent and led to severe cognitive impairment during disease course. The main associated manifestations were depression, pathological laughing and/or crying, urinary incontinence and gait disturbance suggestive of high-level gait disorder. Motor, sensory or cerebellar abnormalities were uncommon. During disease course, superimposed neurological relapses occurred in 61% of cases. Brain MRI revealed multiple periventricular lesions that were extensive and confluent in half of cases, and a severe atrophy measured as an increase in the third ventricular width compared to age-matched healthy controls. Gadolinium-enhancing lesions were common (72%). The mean diagnosis delay from disease onset was 2 years. A principal component analysis on the neuropsychological results revealed that verbal memory assessment is complementary to global cognitive functioning evaluation in these patients with severe cognitive deficit. Verbal memory deficit was associated with high EDSS.

CONCLUSIONS: cog-MS patients might represent a challenging diagnosis, which needs to be individualized for an early management.