ASCEND Trial: why I think the natalizumab in SPMS trial will be negative

Will the natalizumab SPMS (ASCEND) trial be positive and disprove my hypothesis about progressive MS? #MSBlog  #MSResearch

What are the implication of the asynchronous progressive hypothesis for MSers? #MSBlog #MSResearch

"I recently did a post predicting that the fingolimod PPMS trial, or INFORMS trial, will be positive. Since then I have had a lot of discussions with MSers and colleagues the theoretical underpinnings of this prediction. If I am correct the same theoretical predictions should apply to SPMS; based on the theories of therapeutic lag and asynchronous progressive MS hypotheses the natalizumab in SPMS, or ASCEND,  trial should be negative."

"In the Barcelona study of interferon-beta-1b treatment in PPMS after 2-years of treatment there was no difference between PPMSers who had been treated with IFNbeta or placebo. The investigators' concluded that interferon-beta was ineffective in PPMS. However, when these patients were reassessed 5-years after the end of the study there were clear clinical and MRI features favouring interferon treatment. Based on this, and other observations, I have proposed that in progressive MS there is a lag between the onset of action of anti-inflammatory medication and its impact on the biology that underpins progression. The impact of anti-inflammatory medications in progressive MS will take several years to play out in the system that is already in the clinically progressive phase. In other words progression over the next 2 years is primed by focal inflammatory events that have occurred in the past. Therefore, suppressing inflammation today in progressive MS will have not have an impact over the next 2-years as the damage that has primed progression over the next 2 years has already occurred. I predict that all anti-inflammatory therapies will have a lag in terms of showing a treatment response in progressive MS."

"This diagram below illustrates the concept of the therapeutic lag. The bad news is that the natalizumab SPMS trials (ASCEND) is only 2-years in duration, compared to the fingolimod PPMS trial (INFORMS) in which most study subjects having been followed longer than 3 years with some over 5 years. Another factor favouring the INFORMS study is that it is an event driven study and the study will only be completed when enough events, or confirmed progressions occur, to give a definitive result. This is unlike the natalizumab in SPMS, or ASCEND, trial that is time locked and is being run over 96 weeks. Based on the therapeutic lag hypothesis this is not a long enough period of time to see a positive result."

"There is one caveat to the above prediction is the asynchronous progressive MS hypothesis, i.e. neurological systems to be affected first by progressive MS are those that have the longest, or most, wiring and hence more likely to be hit by multiple lesions. This is why the motor system to the legs, bladder and the cerebellar or balance system are typically affected first when progressive disease starts. The other systems (vision, motor system to the upper arms and face, sensory system, cognition, etc.) tend to be affected later by 'overt' progressive disease. I say overt because there is now good MRI evidence that the progressive component of MS is present from the start of the disease. The only reason we don't see it clinically is because the nervous system can compensate. However, once the compensatory systems fail in a particular pathway progressive MS ensues. What this means is that we may have different windows of opportunity to impact on the different functional systems. In other words there are multiple windows of therapeutic opportunity to act in MS and we should therefore shift our focus in progressive MS away from the system already in the clinically progressive phase to those systems that still have reserve capacity and not yet in the clinically progressive phase. Will natalizumab have enough time to act on these open windows of  therapeutic opportunity to give the ASCEND trial a chance of being positive?" 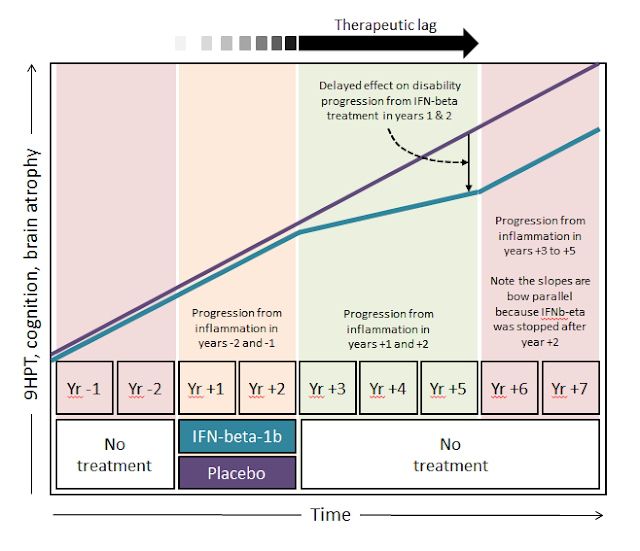 "In the natalizumab SPMS trial the the primary endpoint is the effect of natalizumab relative to placebo on delaying sustained disability progression, defined by 3 month sustained increase (>=20%) from baseline in the 25-foot timed walk test, or 9-hole peg test, or sustained increase in EDSS (0.5 or 1). The inclusion of an upper limb outcome measure makes in this composite, i.e. a system with reserve capacity in most SPMSers who are still walking, makes it much more likely that this trial will be positive in this domain. In addition, the 25-foot timed walk test is also more sensitive to change than the EDSS so there is a small chance that natalizumab may affect this outcome positively as well. However, I think it is unlikely that Natalizumab will have an impact on EDSS progression over 96-weeks. I hope I am wrong."

"It has never made sense to me not being able to prescribe a DMT to an MSer simply because they needed a wheelchair as a result of a devastating spinal cord relapse. What about their upper limb, cognitive and cerebellar function? Do we simply write these systems off because one, or two, long tract systems are severely damaged? I personally think the therapeutic lag and asynchronous progressive MS hypotheses gives MSers hope; hope for treatments that can at least preserve the function of pathways with reserve capacity, whilst the lab scientists work on remyelination and neurorestorative strategies. Buying time; spreading hope!" 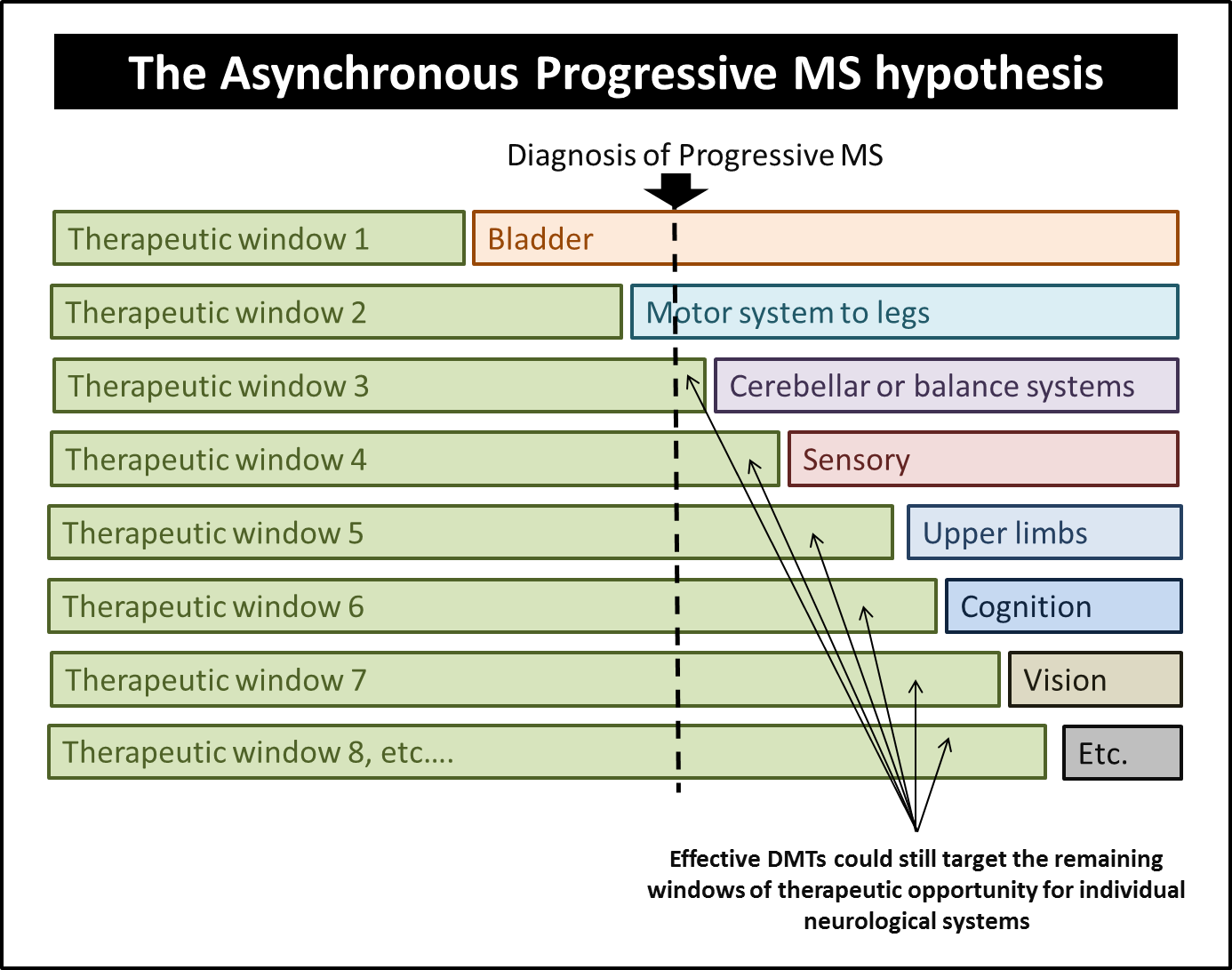 Percentage of participants with confirmed progression of disability in one or more of the Expanded Disability Status Scale (EDSS), Timed 25-Foot Walk (T25FW), or 9-Hole Peg Test (9HPT) [Time Frame: Up to 96 weeks ]

Confirmed disability progression is defined as one or more of the following criteria, confirmed at a second visit at least 6 months later and at Week 96:

Confirmed progression in T25FW: T25FW increased by at least 20% of the baseline walk.