Gilenya failing in PPMS, was it expected

What does ProfG mean? MD1:ProfG 0

The result of no effect in PPMS massively disappointing and does not bode well for the second half and further sends out signals that many immunologists may have to wake up and smell the roses.

Why is MD in the lead? This is because this was based on predictions from our animal model, so I draw your attention to a previous post of work done some time ago.

BACKGROUND: There has been poor translation for the use of immunosuppressive agents from experimental autoimmune encephalomyelitis (EAE), an animal model of multiple sclerosis (MS), into the treatment of MS. This may be due to the fact that most EAE studies examine prophylactic, pre-treatment regimes that prove to be therapeutically-ineffective in long-established, often progressive, MS. FTY720 (fingolimod/Gilenya) is a sphingosine-1-phosphate receptor modulator. This is a new oral agent that markedly reduces the number of relapses in people with MS, compared with currently licensed injectable agents such as the beta interferons. FTY720 has activity against lymphocytes but may also influence oligodendroglia and could therefore have the potential to influence progressive MS, by promoting remyelination.

METHODS: The effect of FTY720 was assessed in relapsing-progressive EAE in mice.

RESULTS: Early intervention during relapsing EAE could completely inhibit subsequent relapses, inhibited the accumulation of neurodegeneration, and facilitated motor recovery. However, when examined in secondary progressive EAE, that develops after the accumulation of deficit from relapsing disease, long-term treatment with FTY720 failed to slow deterioration when initiated late (4 months) into the disease course.

CONCLUSIONS: This study indicates that early intervention with immunosuppressive agents may inhibit the generation of the neurodegenerative microenvironment, which is no longer responsive to potent immunosuppression. However, if treatment is initiated too late, progressive, neurological-disease continues unabated. This suggests that immunosuppression is insufficient to control secondary progression in animals, as has been found so far to be the case in MS, and may warrant early intervention with FTY720 for optimal treatment benefit. 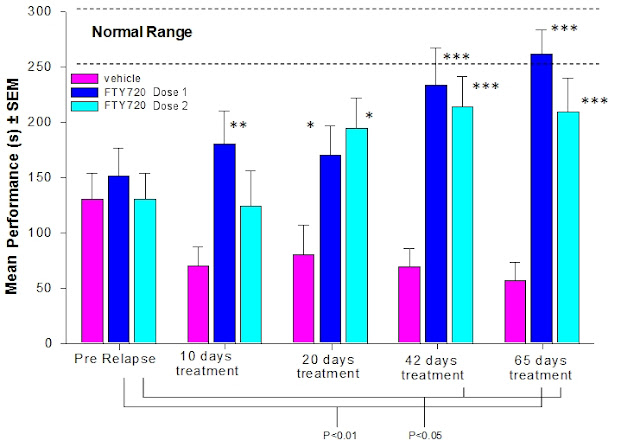 Gilenya (FTY720) is an S1P1 and S1P5 receptor modulator. S1P1 is involved in trapping white blood cells in the lymph nodes and stops relapsing remitting MS. It also stops relapsing-remitting EAE as we showed in this study. S1P5 is strongly expressed in the brain and has lead to the idea that Gilenya may promote repair and the hope that help in progressive MS. In our studies if we blocked relapses we could see that there was some recovery in mobility.

Was this due to the drug or was it because we had stopped disease and the the natural repair mechanisms kicked in? Maybe the former but we could not find evident that there was remyelination, maybe we weren't looking in the right place, maybe it was due to plasticity. Obviously if we blocked relapse it stopped the animals accumulating more nerve damage that occurs as a consequence of relapse. But could it stop progression that isn't attributed to relapsing disease?

It of course shows why we believe in treat early
Most people working with EAE do two to three week experiments. This is never going to tell us much, other than the effect on the inflammatory penumbra at best and maybe over interpretation at worse.
TeamG undertook the longest EAE experiment in history.

We set relapsing remitting disease in motion and allowed a few relapses to occur, more relapses than most researchers ever see. We then had to stop any more relapses occurring because if they occurred, it would obviously cause more nerve loss and disability and so Gilenya would stop relapses and would of course do better than placebo. So we stopped anymore relapses occurring using antigen-specific immunological tolerance induction.This involves a transient depletion of white blood cells followed by a tolerising injection of myelin and after that relapsing autoimmunity is essentially gone forever. Yep it really is that good.

Why people are trying to do immunological tolerance in MS without the prior the transient depletion that makes it really work escapes me. We shall see.

However, we have shown that if secondary progression, seen by worsening in disability, is occurring then blockade of relapsing autoimmunity is not enough to stop progression.

So back to the longest experiment, we stopped relapses then waited for white cells to return and then split the animals to one group to get placebo and another group to get gilenya. So months after starting the experiment, animals got a daily oral dose for a few months, again longer than most experiments in history. Progression accumulated slowly and unfortunately there was no apparent drug effect.

Massively disappointing. But the results are the results
Therefore, we have a concern that something similar could happen in MS, although we would expect it would inhibit gadolinium-enhancing progressive MS. Time will tell as S1P1 modulators are now in trial in both primary and secondary progressive MS, so this is what is important.

CoI: This work was supported by Novartis.