Objectives
The purpose of this study was to evaluate the effects of multiple sclerosis (MS) on the risk of venous thromboembolism (VTE) development.

Methods
We identified patients diagnosed with MS in Taiwan between 1998 and 2010 using the National Health Insurance Research Database and the Catastrophic Illness Patient Database (RCIPD). Each MS patient was frequency matched to 4 controls according to age, sex and the year of MS registration to the RCIPD. Patients with a history of VTE and incomplete information of age and sex were excluded. All patients were followed up from the index year until VTE diagnosis, loss to follow-up or the end of 2010. We calculated the hazard ratios (HRs) and 95% confidence intervals (CIs) of VTE in the MS and comparison cohorts using Cox proportional hazards regression models. 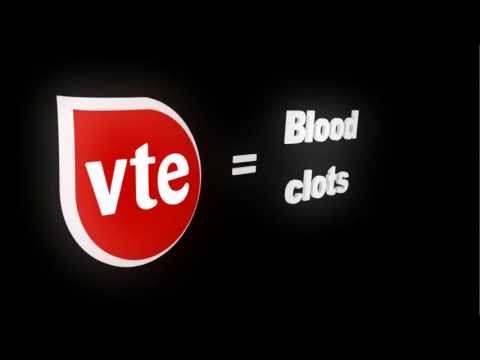 I recall a blogger asking about venous thomboembolism (VTE) risk in MS in the distant past, and they're in luck as today there is study published on exactly this topic; albeit in Taiwan. PwMS in Taiwan between 1998-2010 versus controls were 6.87 times more likely to have a VTE (with a further increase to 11.1 times more likely if you were female) even after adjusting for age, gender and co-morbidities (i.e. other co-existing illnesses such as heart disease or diabetes).
A similar study performed in the UK found this figure to 2.14 higher in PwMS (although this study did not adjust for co-morbidities; Ramagopalan SV et al. Risk of venous thromboembolism in people admitted to hospital with selected immune-mediated diseases: record-linkage study, BMC Med 2011;9:1), whilst a Danish study identified that there was a risk but the overall risk was low (Christensen S et al. Multiple Sclerosis and risk of venous thromboembolism: a population-based cohort study, Neuroepidemiology 2012;38:76-83).
Not surprisingly the risk of VTE increases with the length of hospital stay (associated with immobility) and reduced limb mobility, particularly in the legs resulting in venous stasis and increased risk of thrombosis. The figure below alludes to the contribution of disability to the risk of VTE. 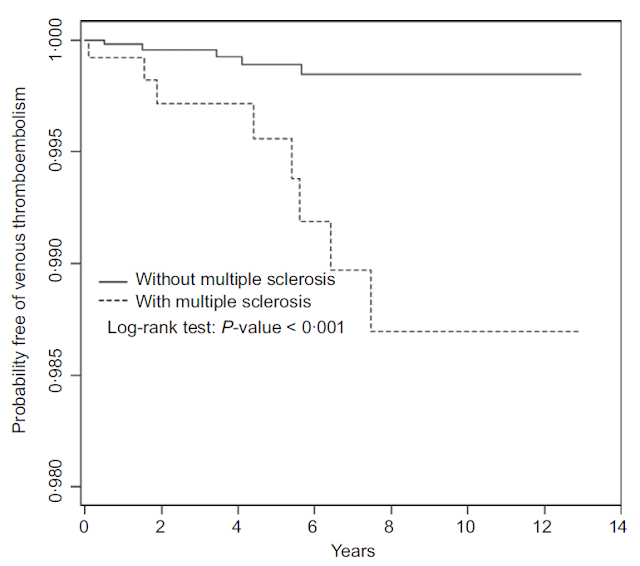 Figure: Kaplan-Meier plot mapping the probability of being free of VTE for PwMS (dashed line) and without MS (solid line) over time.
Currently in the UK PwMS are not started on VTE prevention agents upon hospital admission for their MS alone. These lines of discussion also raise the question of what about at home? Moreover, anti-embolic stockings now are no longer routinely recommended, so this leaves conservative measures such as early and effective mobilisation, hydration and subject education before and during inpatient stay, and on discharge.