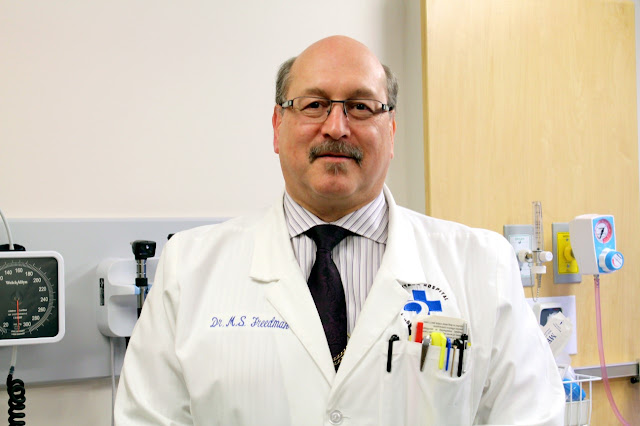 Dr. Freedman is currently professor of medicine in the field of neurology at the University of Ottawa, as well as director of the Multiple Sclerosis Research Unit at the Ottawa Hospital, General Campus and a Senior Scientist at the Ottawa Hospital Research Institute. A graduate of the University of Toronto, Dr. Freedman holds his Masters Degree in Molecular Neurochemistry and continued his postgraduate work specializing in neurology and neuroimmunology. His specialized training took him to the Weizmann Institute of Science, Israel; The National Hospital, Queen Square, London UK, as well as the Montreal Neurological Institute, where he subsequently joined the clinical staff at McGill as an Assistant Professor. He holds his specialist certification in Quebec CSPQ and all of Canada FRCP(C) and is a Fellow of both the American Neurological Association (FANA) and the American Academy of Neurology (FAAN).

Dr. Freedman has published nearly 300 pieces, including articles, books, book chapters and abstracts and has been invited to give hundreds of lectures and presentations nationally and internationally. His extensive research includes the area of molecular neurochemistry, cellular immunology, neuroimmunology and clinical research studies in MS. He is currently holding peer reviewed and industry related funding for clinical and translational research investigating potential MS treatments with a particular interest in cell based therapies. He is was the lead investigator in the Canadian Bone Marrow Transplant Study in MS and co-leader of the International Mesenchymal Stem Cell Transplantation for MS (MESEMS) Study Group.

Dr. Freedman has nearly 30 years of experience in the management of patients with multiple sclerosis and has been the principal investigator on numerous clinical trials with new therapeutic agents for MS. He has experience from serving on several research study steering committees as well as data safety monitoring boards. He serves on the editorial boards for several journals including the Multiple Sclerosis Journal. He has also served on several national and international committees and is currently the Treasurer of the Americas Committee for Treatment and Research in MS (ACTRIMS).

Why do this?
Without knowing what immune mechanism is operating to cause harm in any given MS individual, it might make sense simply to replace the entire system and re-build it using new bone marrow derived stem cells that, once they mature will not attack the CNS.

How is this accomplished?
Bone marrow transplantation procedures have been developed using many different recipes depending on the expertise in any given centres. They all involve 3 basic steps:

1. Mobilization: This is where the stem cells are chased from the bone marrow and collected and frozen for future use.

2. Conditioning: This is the most risky and worrisome part where high doses of potent chemotherapy drugs are used to essentially wipe out the immune system.

3. Stem cell transplantation: Following the conditioning step, without stem cell support the immune system is incapable of growing back and the person would die if not for the ability to generate a new immune system from special bone marrow derived stem cells which are obtained in step 1, are thawed and given intravenously.

What do we do differently from others?
Many other groups have reported on their results using various recipes, but none have eradicated all measures of inflammation going out long-term. We believe it was because they did not go far enough with step 2 above and failed to completely wipe out the old immune system; i.e. there are still remnants of the old system that eventually return to re-attack the CNS. Unless all “memory” is erased, the immune system remembers and can return to its old ways. Our technique is aggressive in insuring that all immunological “memory” is erased; not only memory for the disease, but also from all childhood immunizations and previous infections. As such, patients will need to be re-immunized following the procedure.

1. Mobilization: We use a potent chemotherapy drug called cyclophosphamide as a single intravenous dose followed by a series of daily injections of a drug called filgrastim which helps to mobilize the stem cells from the bone marrow into the blood. After about a week, patients are hooked up to a machine to collect the stem cells from their blood and then, using a specialized set of magnetic beads to select out the specific cells capable of re-growing the immune system, the stem cells are separated from the rest of the blood and are frozen away.

2. Conditioning: Here we again use cyclophosphamide, not in very high doses for several days along with another very toxic drug called busulfan. These 2 were chosen, not only because they are capable of completely removing an immune system, but because both can penetrate the CNS and potentially remove cells that have already made their way in to attack.

3. Stem cell transplantation: Frozen cells from step 1 above are thawed and after a week or so following the conditioning step, these cells are given to the patient intravenously followed by another powerful anti-T cell drug called ATG (anti-thymocyte globulin) which will kill any mature T cell that might still be left in the frozen graft. Patients then re-inject with the filgrastim for several days to help the newly maturing immune cells to “engraft” or set up home again in the bone marrow and start churning out mature immune cells.

What are our results?
We planned on treating 24 patients with aggressive MS (early multiple relapses, EDSS progression to 3.0 or more within the first 5 years of disease, age up to 50, and evidence of ongoing inflammatory disease activity in the way of relapses or MRI or relentless recent disease progression) and having 8 “controls”, who were patients otherwise meeting inclusion criteria but who chose not to have the procedure. (We could only find 2 such individuals: 1 relapsed twice within months of completing a 2 year course of mitoxantrone chemotherapy and eventually went into the study and had a full transplant; the other, also getting mitoxantrone, started to progress again within 5 years.) All patients were meticulously followed regularly with clinical exams, MRI studies and numerous immunological tests.

Despite the very high activity prior to doing the transplant procedure not a single recorded relapse or new MRI lesion was noted in any patient followed for up to 13 years. Additionally, some 30% of patients continued to progress a bit, but all did so immediately within the first 2 years, indicating to us that whatever started this progression was not altered by removing further inflammation. More importantly 70% of patients did not progress and 35% of patients enjoyed some remarkable recovery with return of several functions they had lost for a long time such as sight, walking or balance. The rate of brain loss, as measured by MRI, leveled off and within 5 years was no different than age-matched healthy controls. Most importantly, these results were accomplished in the complete absence of any disease modifying therapies.

These results were not without cost in terms of side effects.

One patient died early on, a tragic consequence of one of the drugs, busulfan, that was only available as an oral formulation, making it difficult to control blood levels. Soon thereafter, an intravenous formulation became available and we no longer saw any of the same toxicity noted with the oral drug. There were many other typical post-transplant complications such as infections, but none were serious as all patients took preventative medicines against bacteria, fungus and viruses. A few people developed problems with their thyroid. There were no long term complications noted within the span of 13 years.

What are the implications of this research?
This work indicates that the immune system is clearly at fault for causing the damage leading to disability in MS, since if it was due to simply genes or environment, then we would have expected that the disease would return in the time we followed these patients. It also presents a new option for patients at the extreme of disease that are not adequately controlled with today’s ever growing array of powerful drugs.

It cannot be stressed more that this is very complicated and risky procedure and as such, should only be undertaken in centres with expertise in the technique as well as having the MS expertise at being able to choose the best patient.

Methods: We did this phase 2 single-arm trial at three hospitals in Canada. We enrolled patients with multiple sclerosis, aged 18–50 years with poor prognosis, ongoing disease activity, and an Expanded Disability Status Scale of 3·0–6·0. Autologous CD34 selected haemopoietic stem-cell grafts were collected after mobilisation with cyclophosphamide and filgrastim. Immunoablation with busulfan, cyclophosphamide, and rabbit anti-thymocyte globulin was followed by aHSCT. The primary outcome was multiple sclerosis activity-free survival (events were clinical relapse, appearance of a new or Gd-enhancing lesion on MRI, and sustained progression of Expanded Disability Status Scale score). This study was registered at ClinicalTrials.gov, NCT01099930.

Findings: Between diagnosis and aHSCT, 24 patients had 167 clinical relapses over 140 patient-years with 188 Gd-enhancing lesions on 48 pre-aHSCT MRI scans. Median follow-up was 6·7 years (range 3·9–12·7). The primary outcome, multiple sclerosis activity-free survival at 3 years after transplantation was 69·6% (95% CI 46·6–84·2). With up to 13 years of follow-up after aHSCT, no relapses occurred and no Gd enhancing lesions or new T2 lesions were seen on 314 MRI sequential scans. The rate of brain atrophy decreased to that expected for healthy controls. One of 24 patients died of transplantation-related complications. 35% of patients had a sustained improvement in their Expanded Disability Status Scale score.

Interpretation: We describe the first treatment to fully halt all detectable CNS inflammatory activity in patients with multiple sclerosis for a prolonged period in the absence of any ongoing disease-modifying drugs. Furthermore, many of the patients had substantial recovery of neurological function despite their disease's aggressive nature.