Question:  What are the long-term outcomes after autologous hematopoietic stem cell transplantation for the treatment of multiple sclerosis?

Findings:  In this multicenter cohort study of 281 patients with predominantly progressive forms of multiple sclerosis who underwent autologous hematopoietic stem cell transplant between 1995 and 2006, transplant-related mortality was 2.8% within 100 days of transplant, and neurological progression-free survival was 46% at 5 years. Younger age, relapsing form of multiple sclerosis, fewer prior immunotherapies, and lower neurological disability score were significantly associated with better outcomes.

Meaning:  The results support the rationale for further randomized clinical trials of autologous hematopoietic stem cell transplantation for the treatment of multiple sclerosis.

Objective:  To evaluate the long-term outcomes in patients who underwent AHSCT for the treatment of MS in a large multicenter cohort.

Design, Setting, and Participants:  Data were obtained in a multicenter, observational, retrospective cohort study. Eligibility criteria were receipt of AHSCT for the treatment of MS between January 1995 and December 2006 and the availability of a prespecified minimum data set comprising the disease subtype at baseline; the Expanded Disability Status Scale (EDSS) score at baseline; information on the administered conditioning regimen and graft manipulation; and at least 1 follow-up visit or report after transplant. The last patient visit was on July 1, 2012. To avoid bias, all eligible patients were included in the analysis regardless of their duration of follow-up. Data analysis was conducted from September 1, 2014 to April 27, 2015.

Conclusions and Relevance:  In this observational study of patients with MS treated with AHSCT, almost half of them remained free from neurological progression for 5 years after transplant. Younger age, relapsing form of MS, fewer prior immunotherapies, and lower baseline EDSS score were factors associated with better outcomes. The results support the rationale for further randomized clinical trials of AHSCT for the treatment of MS.

If you cared to read the paper by ProfG and others members of TeamG on length dependent axonopathy (we hope that it will be open access soon) it suggests that it is not too late to benefit people with progressive MS, even with immunosupression.

Therfore just as well wee havn't given in progressive MS.

This study offers some support when analysis of people with MS undertaking HSCT was done. In this 80% of people had progressive MS and disability progression was stoped in about 50% of 5 people up to 5 years of analysis. It will take longer follow-up to see if this is sustained but based on the data below people continue to fail so at 10 years the progression free cohort only makes up about 30 percent. As you can see if you were relapsing verses progressive you were about two-three times as likely to see benefit.

So it says 50% of people progressed and tells me we need more than peripheral immunosuppression. I suspect you need to deal with inflammation in the brain. It also says that nearly 3% of people didnt make it, so it is not something you should do with your eyes closed. However in more recent studies this risk of mortality has reduced.

As one of the readers says "Graph C (below) indicates that no-one with PPMS did not progress past 5 years so it sort of says do not expect miracles of anyone taking this treatment, given the risks is this really any better than other DMT?" 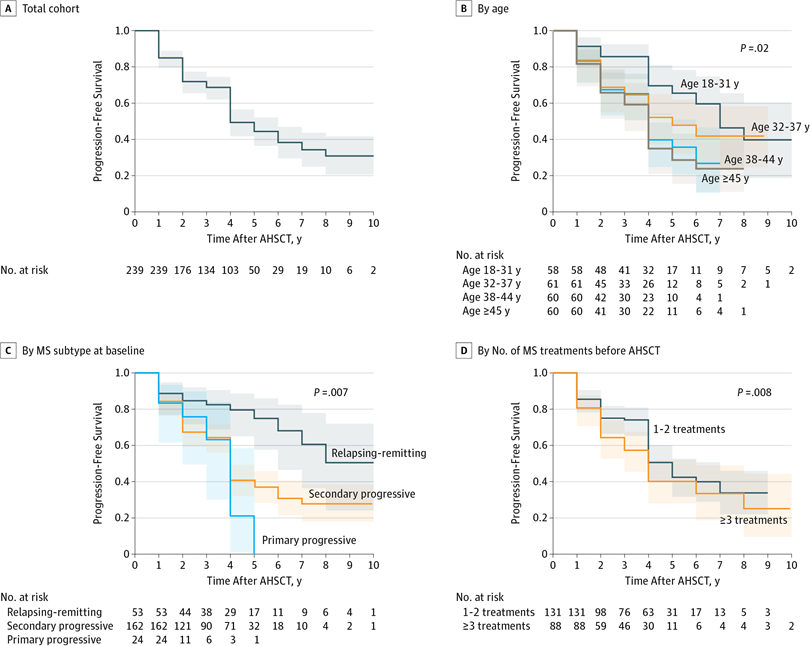 The data raise the possibility that AHSCT may have reduced the risk of disease progression in the treated patients, yet demonstration is lacking in the absence of a control group.

The incidence of new autoimmune disease was 5.0% (14 of 281), but considerably lower than after lymphocyte-depleting treatment with alemtuzumab, which approaches a risk of 50%.,