Although multiple sclerosis (MS) is considered to be a CD4,Th17-mediated autoimmune disease, supportive evidence is perhaps circumstantial, often based on animal studies, and is questioned by the perceived failure of CD4-depleting antibodies to control relapsing MS. Therefore it was of interest to find that current MS-treatments, believed to act via T cell inhibition including: beta-interferons, glatiramer acetate, cytostatic agents, dimethyl fumarate, fingolimod, cladribine, daclizumab, rituximab/ ocrelizumab physically, or functionally in the case of natalizumab, also depleted CD19+,CD27+ memory B cells. This depletion was substantial and long-term following CD52 and CD20-depletion, and both also induced long-term inhibition of MS with few treatment cycles, indicating induction-therapy activity. Importantly, memory B cells were augmented by B cell activating factor (atacicept) and tumor necrosis factor (infliximab) blockade that are known to worsen MS. This creates a unifying concept centered on memory B cells that is consistent with therapeutic, histopathological and etiological aspects of MS. 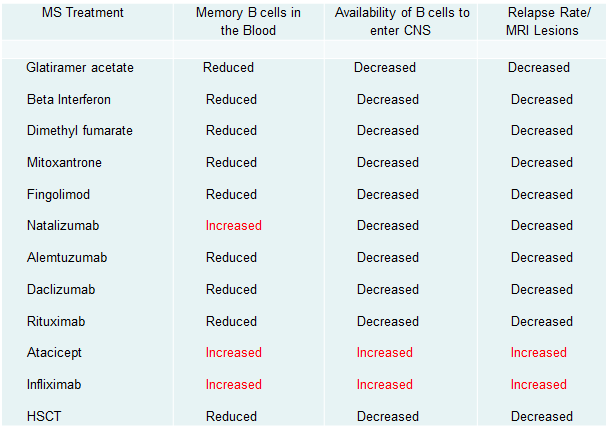 Following on from our recent post (major target for treatment), it is clear that some of you don't want to read the full story (if you do click here) and would like it summarised

ProfG was set to go to Lisbon to present at an antibody engineering meeting to talk on "How do antibodies work in MS". Rather than try present his 65 slides in 30min, we aimed to see if we could answer the question.

So do alemtuzumab, rituximab/ocrelizumab, daclizumab and natalizumab have anything in common?

Although alemtuzumab depletes T cells, it was evident that memory B cell depletion is marked and it set us thinking as an alternative to the T cell hypothesis.

Surprisingly all agents that inhibit MS could cause depletion of memory B cells. Interestingly those that worsen MS cause elevated memory B cell responses in some people.

Surprise surprise, we found papers where some people had similar thoughts (there is no such things as an original idea) but in most cases this was a throw-away idea and was dumped in the midst of many other concepts. However, we had more meat on the story by that time, we saw others work.

One of the odd one being (F below) natalizumab that augmented numbers in the blood, but as the idea is that it stops trafficking into the brain, this should be expected. 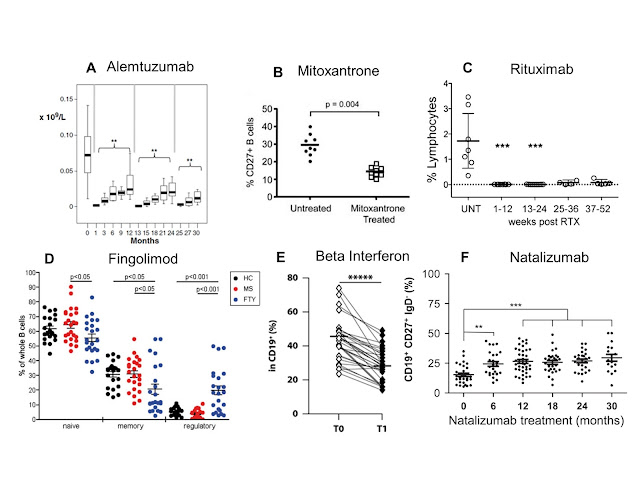 Daclizumab is another one of the odd treatments. However once you realise that memory B cells express CD25 and you can see that dacliziumab depletes CD19 B cells, you get in a groove and start looking for it, and find supportive evidence pop-up all over the place.  There is also a poster on teriflunomide which supports this concept too.

Some publishers wanted too much money for us to include every example for every treatment in the publication. But we give some references if you want to look and the paper is "open source".

So this was revelation part one. The next one has additional implications.

Importantly the B memory cell idea gives more insight on ocrelizumab to suggest that CD20 treatment may be over-used to achieve benefit.

The data can be interpreted to suggest that ocrelizumab and alemtuzumab could work in the same way (bad news for both companies, sorry).

One wonders why such important data has not been properly published? It was dumped in an ECTRIMS abstract in 2012 and an AAN abstract in 2013 (where we found them. Do neurologists have enough time in a couple of hours to see and digest a 1000 posters?) and so there is no excuse from the companies or authors that they have not had enough time to publish the work.  There are enough journals desperate for papers.

Now look at the figure above and you will see there is a clear inference that memory B cell levels may be a biomarker for treatment responsiveness.

Looking at figure E it shows only a few people on beta interferon have less than 20% of memory CD19 B cells. Are these the responders? Fingolimod (E) has more, but some failures. In (B) there is more depletion with mitoxantrone and (C) rituximab shows a lot of depletion, which is consistent with its high efficacy in MS.

There are studies in other conditions that use rituximab showing that CD19, CD27 numbers rise in the 4 months before a relapse and can be used as a biomarker to inform on retreatment such that one may be able to use 2/3 less rituximab, which is both safer and cheaper and takes us some way forward to personalised medicine.

Importantly memory B cells are the population of cells that accumulates in the CNS in MS and they express the EBV receptor, so depletion of the memory B cell subset depletes the antigen presenting cell that can activate T cells, or perhaps it eliminates the viral reservoir and removes the trigger of MS.

In many cases both unswitched (Have not change the antibody subtype they can produce) and switched (IgM and IgD are down regulated and IgG is upregulated from the unswtichted to switched) memory B cells are affected. Which subset is the critical one, the one that has already been reported to be increased in MS.

The T cell immunologists, will have a hard time with this concept, and their stock answer it is because it blocks antigen presentation, but the simple answer is what data argues against this concept?

Is the data that suggests a T cell action solid or is it simply circumstantial. Have a read of the paper for your self it is open access (CLICK to DOWNLOAD).

Maybe the data miners out there can do some trawling and see what's against the idea.  Send them (paper titles) in and lets see if the idea flies.

We have thrown down the gauntlet, and if read, people will either agree or disagree.