Looking in the wrong place to find efficacy for alemtuzumab

To continue on explaining our recent  paper


IMPORTANCE Alemtuzumab, a CD52-depleting monoclonal antibody, effectively inhibits relapsing multiple sclerosis (MS) but is associated with a high incidence of secondary B-cell autoimmunities that limit use. These effects may be avoided through control of B-cell hyperproliferation.
OBJECTIVE To investigate whether the data describing the effect of alemtuzumab on lymphocyte subsets collected during the phase 3 trial program reveal mechanisms explaining efficacy and the risk for secondary autoimmunity with treatment of MS.
DESIGN, SETTING, AND PARTICIPANTS Lymphocyte reconstitution data from regulatory submissions of the pivotal Comparison of Alemtuzumab and Rebif Efficacy in Multiple Sclerosis I and II (CARE-MS I and II) trials were obtained from the European Medicines Agency via Freedom of Information requests. Data used in this study were reported from June 22 to October 12, 2016.
MAIN OUTCOMES AND MEASURES Tabulated data from T- and B-lymphocyte subset analysis and antidrug antibody responses were extracted from the supplied documents.
RESULTS Alemtuzumab depleted CD4+ T cells by more than 95%, including regulatory cells (−80%) and CD8+ T cells (>80% depletion), which remained well below reference levels throughout the trials. However, although CD19+ B cells were initially also depleted (>85%), marked (180% increase) hyper-repopulation of immature B cells occurred with conversion to mature B cells over time. These lymphocyte kinetics were associated with rapid development of alemtuzumab-binding and -neutralizing antibodies and subsequent occurrence of secondary B-cell autoimmunity. Hyperrepopulation of B cells masked a marked, long-term depletion of CD19+ memory B cells that may underpin efficacy in MS.
CONCLUSIONS AND RELEVANCE Although blockade of memory T and B cells may limit MS, rapid CD19+ B-cell subset repopulation in the absence of effective T-cell regulation has implications for the safety and efficacy of alemtuzumab. Controlling B-cell proliferation until T-cell regulation recovers may limit secondary autoimmunity, which does not occur with other B-cell–depleting agents.

When I wrote about this a while ago a blogger called "Head Master"  complained it was long and rambling.  "Bonzoforgot AKA LoL" simply ranted:-)

I asked him/her to read slowly and read it again. Because it is important. In hindsight I think it questioned the way that fingolimod is believed to work:-(

However, I gave a hypothetical example working from first principles.

You complained you didn't have a real example so here it is.

Today, I now ask that you read this very slowly, and read it properly because this is real life and not hypothetical.

I realise that this may not make me popular.

How Does Alemtuzumab Work?

Virtually every EAE study where there is an inhibition, proposes a mechanism whereby control of EAE is associated with a loss of T reg function.

Therefore it makes you think that wouldn't it be great if our mechanism of action is associated with an increase in T regulatory function.

You make do your experiments to prove that your drug works by increasing T reg cells.

Don't believe me. Have a read of most current EAE papers. Is there a dissenting voice....not really, because they would get their paper rejected:-(.

There you have it.  Alemtuzumab is associated with a reduction in CD4 T cell numbers and a relative increase in T regulatory cells. This is how alemtuzumab works!!! Yeah sorted.

They said "Prior to treatment there was no difference between patients and healthy controls in the proportion of CD4+ T cells that were CD4+CD25high. However, after Campath-1H treatment CD4+CD25high cells were significantly over-represented in the depleted CD4+ pool....This was most marked at 3 months (median of 13.5% of CD4+ T cells compared to a baseline of 3.7%, p < 0.000002..)." 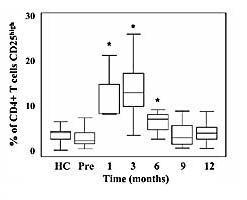 So Tregs increase at least for a few months after treatment

Did anyone else find this?....Yep everyone. Even those not working in MS, it all fits the concept that Tregs control autoimmunity 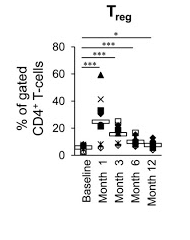 Also Genzyme found it and bought into the idea too.

"The mean percentage of Foxp3+ CD4+ T cells was 46·5 ± 3·9% in the alemtuzumab-exposed group compared with 3·8 ± 0·4% in the control IgG group, amounting to an average 13-fold increase in the frequency of T cells with a regulatory phenotype" Abstract...."Consistent with the observed increase in Treg cell frequency, the CD25(hi) T-cell population was necessary for the suppressive activity of alemtuzumab-exposed T cells. The mechanism of this suppression was found to be dependent on both cell-cell contact and interleukin-2 consumption. These findings suggest that an alemtuzumab-mediated increase in the proportion of Treg cells may play a role in promoting the long-term efficacy of alemtuzumab in patients with multiple sclerosis".

So there we go dogma proved

"Tregs (i.e., CD4+CD25high), were significantly over-represented for the first 6 months after alemtuzumab treatment, even though the proportion of Tregs to total CD4+ T cells was similar in MS patients and healthy controls prior to treatment." 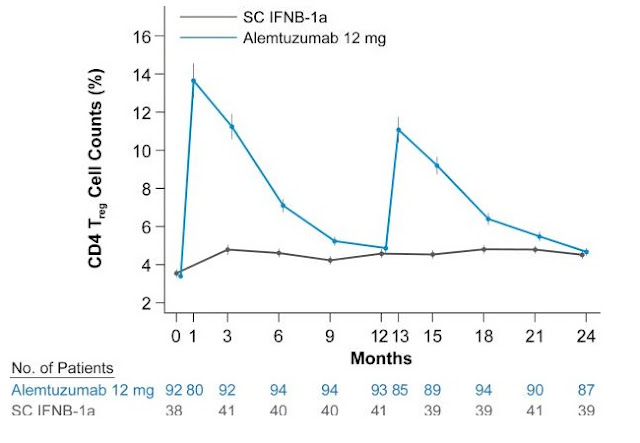 So after each infusion (at 0 and 12 months) the proportion of T regulatory cell number increases.

Why not look at the data...oh forgot you couldn't because Genzyme and the authors (including ProfG:-)  have not published their findings despite reporting the work over 4 years ago!!!!.

There was no real mention in the pivotal trial data publications of anything except B cells are back to normal at 6 months and T cells are near normal after a year....Data not published, even in supplementary data!

There was more in the ECTRIMS poster vault. 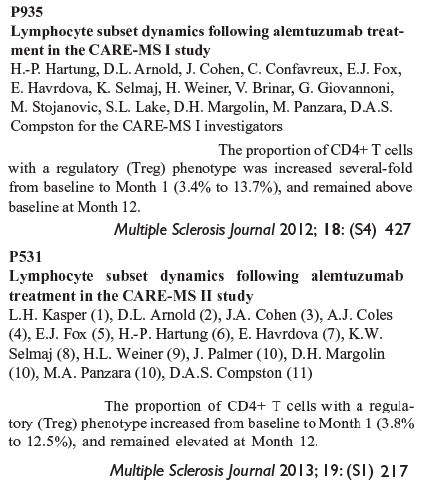 So there you have it every paper supports the concept that alemtuzumab selectively spares T regulatory cells and suggests that they increase after alemtuzumab.

This is why MS is inhibited. QED.  I think this maybe right but not because of this data

So it all works great, if you think MS is a T cell issue,  Treg cells outnumber the T cells, MS is stopped. However at 12 months after treatment they are back to normal and the T cells are still wiped out of existence for another 12 months or more. So when the T regs surge there are no pathogenic cells to regulate they are gone for a few years. So this idea doesn't hold much water

But what if there is a B cell problem?
then perhaps your ideas are up s**t creek without a paddle:-(

Now remember what I said above!

Base your assumptions on absolute numbers not percentages.

So how many T regulatory cells are there?

Bonzoforgot (one of the readers LOL)...go get your calculator so we can work this one out:-). However, hope you can do the important bit without one. 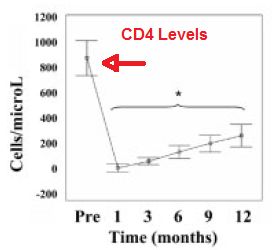 If we look at Figure (above. It was 1A in the original) for total CD4 T cell numbers.

So in Health about 30,000 T regs per millilitre (a thousandth of a litre of blood)


"We attempted to demonstrate the functional ability of these cells....... ex vivo. However, we could not harvest sufficient cells; at 3 months after Campath-1H, 50 mL of blood from our patients..... yielded less than 100 CD4+CD25high cells.

Therefore after alemtuzumab we appear to go from 31,450 cells/mL down to 2 cells/mL, so hardly an amazing increase, as implied by the percentages (3.7% to 13.5%) and all the Treg supporting papers and in fact it represents over a 99.99% depletion.

The numbers are different but the percentages are consistent with the CARE MS I  (findings below). However, I think the point is made, there it is a very, very significant decrease. 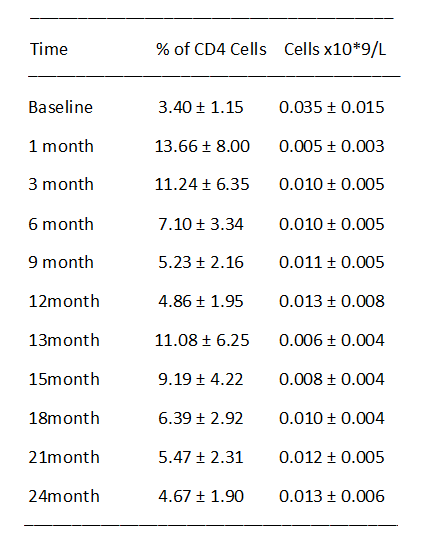 This is what we found when we looked at the trial data results
Luckily in the phase III trial data the inferences are based on more
cells,

Therefore the implication of an increase is hardly relevant.

In my humble Opinion....The Question is Wrong.

It is not! What do T regs do, to control MS?

This latter question was thought about and dismissed

"We have previously disproved the.....possibility: in the context of multiple sclerosis treatment by alemtuzumab, CD4+CD25hi Tregs and lymphocyte FoxP3 expression are both increased for 6 months after treatment..."


If you get this, we can start to understand how alemtuzumab works and why it may cause autoimmune side effects.