Is HSCT for everyone, or not?

The HSCT zealots would want you to believe that HSCT is the solution to MS and that we the neurologists are preventing you from accessing this curative treatment. Are they correct? Or do we need evidence from randomised trials?

I saw a patient for a third opinion late last year. She was in her mid-20s and had just failed alemtuzumab with a severe spinal cord relapse 19 months into her 2-year alemtuzumab treatment protocol. The question is what do we do now? She had previously failed interferon-beta and hence fulfilled our criteria for HSCT. When I mentioned to her that the risk of premature ovarian failure (early menopause) was over 40% with aHSCT and that she would need to freeze down eggs if she wanted to optimise her chances of having children in the future she answered an emphatic no. HSCT as a treatment option was too risky for her. This risk was not around the infectious complications, but fertility.

Please note HSCT is not for everyone based on personal circumstances. This patient then opted for natalizumab treatment as her JCV serostatus was negative. I think the latter is a very wise choice given her wish to start a family in the future.

I have commented extensively in the past on HSCT (both non-myeloablative and myeloablative) and I would urge you to reread my earlier post after the BBC Panorama programme on the topic.

A large number of the HSCT zealots seem to ignore the fact that HSCT does not result in a cure in many pwMS treated with HSCT and that there is an issue of HSCT-related mortality. The latter is often conveniently ignored.

The recent study by Sullivan and colleagues quote a 6% mortality rate at 6 years in patients with severe scleroderma treated with myeloablative HSCT compared to 0% in the standard cyclophosphamide group. One could argue that mortality rates are higher in this population than in people with MS. I suspect that this may be correct, but in the Murao et al. HSCT MS meta-analysis paper there were 37 deaths, out of 281 HSCT treated patients with MS or a 13% mortality rate, from any cause (treatment-related or not); 8 deaths or 2.8% were reported within 100 days from transplant and were considered transplant-related mortality. These figures are probably within the same range as those reported for other autoimmune diseases treated with HSCT. Are you prepared to take these risks? Not all pwMS are and we need to respect their decisions.

How effective is HSCT? In the scleroderma study below the so called event-free survival rate at 54 months was 79% in the transplantation group compared to 50% in the cyclophosphamide group. What about MS? In the metanalysis below the 5-year probability of progression-free survival as assessed by the EDSS score was 46%. Is this better than alemtuzumab, natalizumab, ocrelizumab, rituximab or cladribine? Let's generate the evidence from head-2-head studies and find out.

The main message from this post is that HSCT is not that safe; HSCT has many short-term complications including a relatively high mortality and although its efficacy is high it is not necessarily higher than currently licensed DMTs. So don't believe everything the HSCT zealots tell you or ask them to show you the data.

Please note that we at Barts-MS do offer HSCT as a treatment option, but patients have to fulfil the criteria as set by the London MS-AHSCT Collaborative Group. We are not denying people with MS access to this treatment option.


METHODS: We randomly assigned adults (18 to 69 years of age) with severe scleroderma to undergo myeloablative autologous stem-cell transplantation (36 participants) or to receive cyclophosphamide (39 participants). The primary end point was a global rank composite score comparing participants with each other on the basis of a hierarchy of disease features assessed at 54 months: death, event-free survival (survival without respiratory, renal, or cardiac failure), forced vital capacity, the score on the Disability Index of the Health Assessment Questionnaire, and the modified Rodnan skin score.

CONCLUSIONS: Myeloablative autologous hematopoietic stem-cell transplantation achieved long-term benefits in patients with scleroderma, including improved event-free and overall survival, at a cost of increased expected toxicity. Rates of treatment-related death and post-transplantation use of DMARDs were lower than those in previous reports of nonmyeloablative transplantation. (Funded by the National Institute of Allergy and Infectious Diseases and the National Institutes of Health; ClinicalTrials.gov number, NCT00114530 .).

IMPORTANCE: Autologous hematopoietic stem cell transplantation (AHSCT) may be effective in aggressive forms of multiple sclerosis(MS) that fail to respond to standard therapies.

OBJECTIVE: To evaluate the long-term outcomes in patients who underwent AHSCT for the treatment of MS in a large multicenter cohort.

DESIGN, SETTING, AND PARTICIPANTS: Data were obtained in a multicenter, observational, retrospective cohort study. Eligibility criteria were receipt of AHSCT for the treatment of MS between January 1995 and December 2006 and the availability of a prespecified minimum data set comprising the disease subtype at baseline; the Expanded Disability Status Scale (EDSS) score at baseline; information on the administered conditioning regimen and graft manipulation; and at least 1 follow-up visit or report after transplant. The last patient visit was on July 1, 2012. To avoid bias, all eligible patients were included in the analysis regardless of their duration of follow-up. Data analysis was conducted from September 1, 2014 to April 27, 2015. 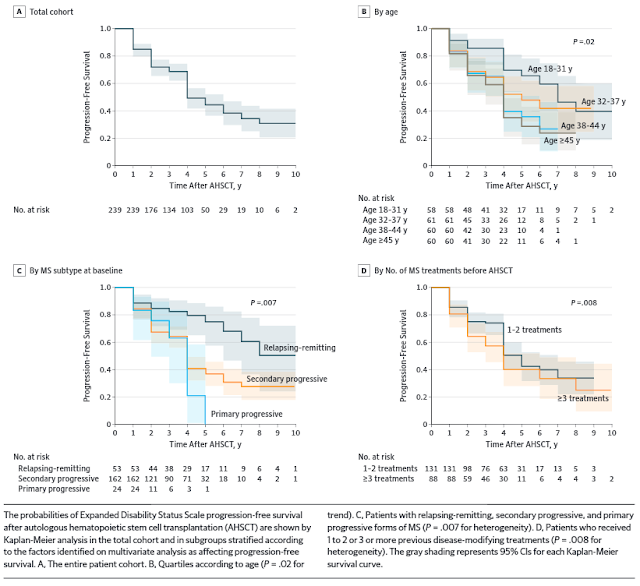 CONCLUSIONS AND RELEVANCE: In this observational study of patients with MS treated with AHSCT, almost half of them remained free from neurological progression for 5 years after transplant. Younger age, relapsing form of MS, fewer prior immunotherapies, and lower baseline EDSS score were factors associated with better outcomes. The results support the rationale for further randomized clinical trials of AHSCT for the treatment of MS.